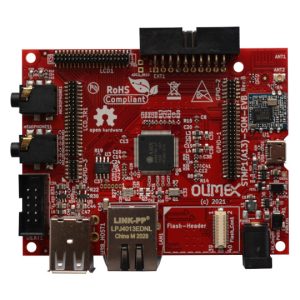 Recently, Olimex unveiled the release of STMicroelectronics’ STM32MP1 SoC-based products, the STMP15X-SOM SoM, and the STMP1(A13)-EVB eval board. The STM32MP15X SoC features dual-core Arm Cortex-A7/M4 combined with an LCD interface, dedicated to 3D Graphics Processing Unit (GPU). Additionally, the eval board is compatible with the new STM32MP1 module and the previous A13-based SOM.

The STMP15X-SOM is a system-on-module (SoM) available in industrial and extended temperature ranges. It is pin to pin compatible with the A13-SOM System On Module. The STMP15X-SOM comes in three versions with variations in the SoC models. These include STMP151-SOM, STMP153-SOM, and STMP157-SOM. The modules come with a MicroSD card slot for memory storage and 256 or 512MB DDR3L of system memory.

Discussing further, the board design comes with an onboard Power Management Unit (PMU) based on AXP209 IC. It enables the power voltage to the SoC core, peripherals, DDR3L memory, and other components to be programmable through I2C. Generally, the PMU is included in battery-operated devices such as mobile phones and portable media players to reduce the amount of space required.

Moreover, when a regular power source fails or voltage drops to an unacceptable level, the onboard LiPo battery functions as an Uninterruptible Power Supply (UPS). Thus, it provides backup power to the SoC, memory, and PMU. The STMP15X-SOM also features the ES8388, a low-power stereo audio codec, designed for portable audio devices and many more.

Source: OLIMEX STMP15X-SOM AND STMP1(A13)-EVB EVAL BOARD BASED ON STM32MP1 SOC