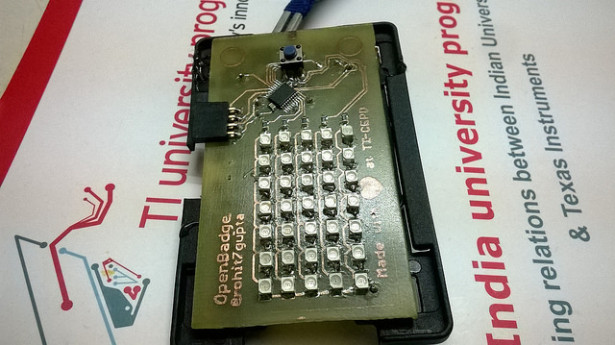 Badges are amazing things. Better when you make your own. I was about to attend the 1st MakerFest at NID, Ahmedabad and thought of taking something unique to the event. Badge was a great option and suited the maker theme of the event. So, sitting down with a pen and paper i drew what it would look like and came up something that could be retro-fitted to a usual boring office badge and would have a LED array to display text messages , the obvious a rechargeable battery ,light weight and of course infinitely hackable, just in-case people wish to remake it, which seldom is the case.

For the LED array we could use the usual LED Matrix,5×7 seemed to be a good size comfortable for both the pins and programmer.But..

The LED Matrix available in stores nearby had a lot of issues:

So, I had to make a tough choice of soldering 35 LEDs which meant the PCB was going to be Dou.Double Sided (Literal stammering). I had never done double sided at home. But it was never too late and that difficult. Basically you have to align two sides and just slip in the copper clad , tape it , iron it and etch it and then Hope is all you need !

FYI, that ‘basically’ came after i spoilt one full PCB.

PRO-TIP: You can have some alignment marks out of the scope of PCB in different directions in the dimension layer. Now when you align the front and back you just align the marks. Check this instructable i used as a reference.

The major elements on the PCB were:

Schematics and PCBs took 3 days of part-time work. Etching,Drilling and Soldering took a nighter.I had a provision to use the PCB directly as the badge with two big drill holes on the top.

Check out the images below:

After experimenting with readability, i found out that the display was a dud in bright light. So, i repurposed an already cut-out heart shaped Red Diffuser for the display. It was a game changer.

I have built a GPS Logger and it works very well to trace the drove route for two years. By...