There are twenty-six pins in total: three power supply pins, 3V3 (3.3V), 5V0 (5.0V) and GND (0V); 6 DNC (do not connect) pins; and seventeen GPIOpins. Some of these seventeen pins have alternative functions as well, but we won’t dwell on those now.

A breadboard has several key features. It has red and blue lines which demarcate the holes belonging to the supply voltage rails (which will be 3.3V for our purposes since the GPIO pins operate at 3.3V) and ground rails (GND) respectively. The holes in the same group are linked via connections inside the breadboard.

The rest of the pin holes can be grouped into segments of 5 shown in the black boxes. The holes in each segment are linked together, but the segments are not connected to one another.

It is recommended to link up all the supply voltage and ground rails as shown below for easy wiring later on.

So, what can we actually do? Lots!

Connect the 3.3V and GND pins of the Raspberry Pi to the corresponding rails on the breadboard using the male/female jumper cables.

Add in the switch and the 10kΩ resistor. Note that the pushbutton switch has 4 pins and you will have to decide which two pins to connect to the pin header by referring to its technical datasheet.

If you find that the switch doesn’t fit into the breadboard well, straighten the pins using a pair of pliers a little before inserting it into the board.

Now, connect the LED to GPIO10 pin of the Raspberry Pi pin header and the switch to GPIO8 pin.

Now, we’ll write some code in Python to trigger the turning on of the LED upon pressing the switch. First, we need to install a Python module, RPi.GPIO, to control the GPIO pins for the Raspberry Pi.

Type the following lines in LXTerminal to do so:
sudo apt-get install python-rpi.gpio

Now, open a text editor and type the following code. This will program the switch and LED, and the LED will be turned on when the switch is pressed. To run the code, type python your_filename.py in a terminal.

Operating a bicoloured LED on the Raspberry Pi

Now, let’s have code that changes the state of the LED every second when the button is pressed:

# Import the required modules.
import RPi.GPIO as GPIO
import time
# Set the numbering sequence of the pins, then set pins ten and twelve to output, and pin eight to input.
GPIO.setmode(GPIO.BOARD)
GPIO.setup(10, GPIO.OUT)
GPIO.setup(12, GPIO.OUT)
GPIO.setup(8, GPIO.IN)
# Turn both of the LEDs off.
GPIO.output(10, True)
GPIO.output(12, True)
# The SwitchState variable is 1 if the button is pressed, and 0 otherwise. LEDState is 0 when off, 1 when red, and 2 when green.
SwitchState = 0
LEDState = 0 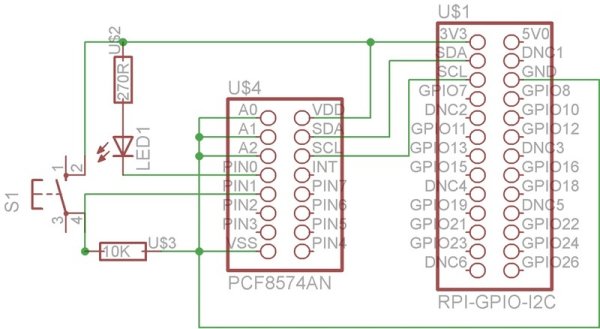 For more detail: Operating a Simple Switch and LED on the Raspberry Pi