Pi enthusiast and maker Penk Chen has created a fantastic Raspberry Pi laptop powered by a Raspberry Pi Zero 2W and all the components are fitted in a custom designed 3D printed enclosure. Equipped with a 7.9-inch touchscreen display and featuring a 48-key mechanical keyboard the style of the build has been inspired by 1990s organizers designed to fold up and slip into your pocket. Hinging a case of this size using 3D printed parts is always tricky however Chen solve this by using hinges designed for a Game Boy Advance SP console. 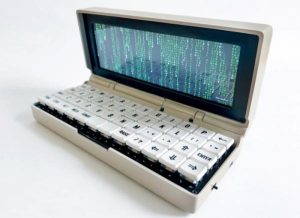 The Raspberry Pi Zero 2 W computer. “was a natural fit,” says Chen. “Looking back at its predecessors, you will find that there’s virtually nothing to complain about except to marvel at the wonders of modern technology.” – “The weight distribution was not an easy task,” Penk explains. “The screen is mounted in a rather top-heavy fashion, so it took me some time to properly design the chassis and place counterweights so that it would not tip over when opened at its maximum angle.””

” “What could be more nostalgic than using genuine console parts from the 1990s?” he asks. It was then a matter of connecting everything up – in this case, largely plugging the components together – and getting Raspberry Pi to run Raspberry Pi OS for an instant mini-machine. “

Everyone knows that when it comes to presenting your build to the interweb community, cable management is the most important thing, and I’m terrible at soldering,” he laughs, before adding that in a world of supply chain disruption, it also made the project more viable. “I’m now experimenting with the mouse keys feature of QMK firmware to see if I can rely on the keyboard more when using Raspberry Pi OS,” he says, explaining that he’s not finished with this project just yet.”

For more details jump over to the official Raspberry Pi website by following the link below.

In 2019 LEGO introduced the Powered Up system with which their Technic models can be controlled with an app. With...