The SparkFun Pi Servo Hat allows your Raspberry Pi to control up to 16 servo motors via I2C connection. This saves GPIO and lets you use the onboard GPIO for other purposes. Furthermore, the Pi Servo Shield adds a serial terminal connection which will allow you to bring up a Raspberry Pi without having to hook it up to a monitor and keyboard. Here’s what you need to follow along with this tutorial. We suggest purchasing a blank microSD card rather than a NOOBS ready card, since the NOOBS ready cards may not have a new enough OS to support the Pi Zero W.

In addition, you’ll want some kind of servo motor to test the setup. Try testing the examples provided later in the tutorial with the generic sub-micro servo first.

No special tools are required to follow this product assembly. You will need a soldering iron, solder, and general soldering accessories.

There are only a few items of interest on the board, as it is a hat designed to be minimally difficult to use.

Power supply isolation jumper – This jumper can be cleared (it is closed by default) to isolate the servo power rail from the Pi 5V power rail. Why would you want to do that? If there are several servos, or large servos with a heavy load on them, the noise created on the power supply rail by the servo motors can cause undesired operation in the Pi, up to a complete reset or shutdown. Note that, so long as the Pi is powered, the serial interface will still work regardless of the state of this jumper.

Servo motor pin headers – These headers are spaced out to make it easier to attach servo motors to them. They are pinned out in the proper order for most hobby-type servo motor connectors.

We suggest soldering the male headers onto the Pi Zero W. My favorite trick for this type of situtaion is to solder down one pin, then melt the solder on that pin with the iron held in my right hand and use my left hand to adjust the header until it sits flat as shown below. Make sure that you are soldering with the header’s shorter side and the longer pins are on the component side. After tacking down one pin, finish soldering all the pins down to the Pi Zero W. 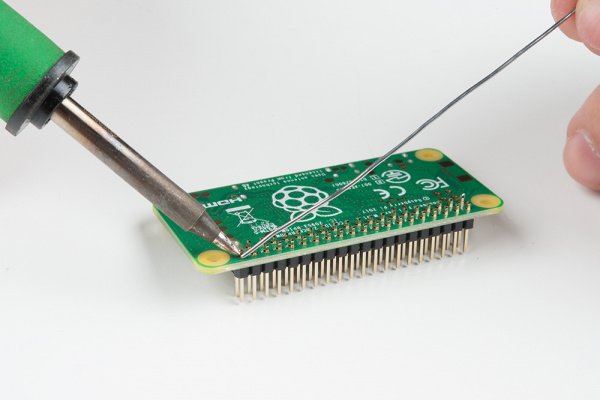 Repeat the steps with the female header and the Pi Servo Hat. 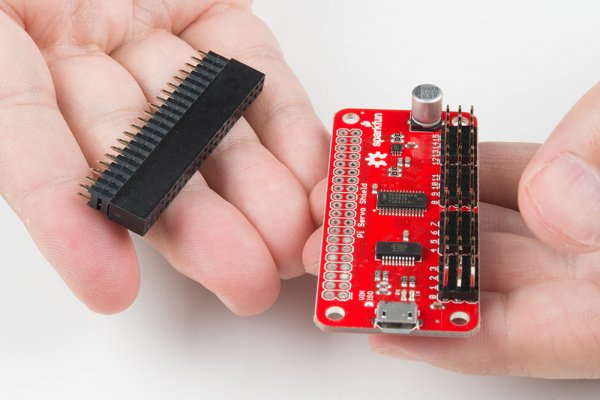 Make sure to insert the short pins from the bottom of the board and add solder to the component side so that the Pi Servo Hat stacks on top of the Pi Zero W’s male header pins. You will also need to make sure that the header is sitting level before soldering down all the pins. 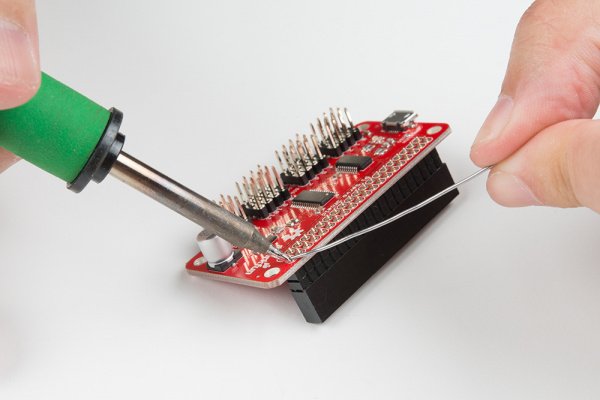 Once the headers have been soldered, stack the Pi Servo Hat on the Pi Zero W. Then connect a hobby servo to a channel “0” based on the servo that you are using. Try looking at the hobby servo’s datasheet or referring to some of the standard servo connector pinouts listed in this tutorial. Using a sufficient 5V wall adapter, we can power the Pi Zero W. Plug the wall adapter into a wall outlet for power and connect the micro-B connector labeled as the “PWR IN” port on the Pi Zero W.

We’ll go over in some detail here how to access and use the pi servo hat in Python.

Full example code is available in the product GitHub repository.

First point: in most OS level interactions, the I2C bus is referred to as SMBus. Thus we get our first lines of code. This imports the smbus module, creates an object of type SMBus, and attaches it to bus “1” of the Pi’s various SMBuses.
import smbus
bus = smbus.SMBus(1)

We have to tell the program the part’s address. By default, it is 0x40, so set a variable to that for later use.

Next, we want to enable the PWM chip and tell it to automatically increment addresses after a write (that lets us do single-operation multi-byte writes).

Write Values to the PWM Registers

That’s all the setup that needs to be done. From here on out, we can write data to the PWM chip and expect to have it respond. Here’s an example.

The first write is to the “start time” register for channel 0. By default, the PWM frequency of the chip is 200Hz, or one pulse every 5ms. The start time register determines when the pulse goes high in the 5ms cycle. All channels are synchronized to that cycle. Generally, this should be written to 0. The second write is to the “stop time” register, and it controls when the pulse should go low. The range for this value is from 0 to 4095, and each count represents one slice of that 5ms period (5ms/4095), or about 1.2us. Thus, the value of 1250 written above represents about 1.5ms of high time per 5ms period.

If you write a 0 to the start address, every degree of offset from 90 degrees requires 4.6 counts written to the stop address. In other words, multiply the number of degrees offset from neutral you wish to achieve by 4.6, then either add or subtract that result from 1250, depending on the direction of motion you wish. For example, a 45 degree offset from center would be 207 (45×4.6) counts either more or less than 1250, depending upon the direction you desire the motion to be in.