Raspberry Pi enthusiasts may be interested in a new 4G IoT HAT specifically created for the excellent range of Raspberry Pi mini PC systems in the form of PiTalk. Designed to provide users with the most convenient networking choice for your IOT applications the PiTalk has been launched via Kickstarter this month and has already blasted past it’s required pledge goal with still 26 days remaining on its campaign. 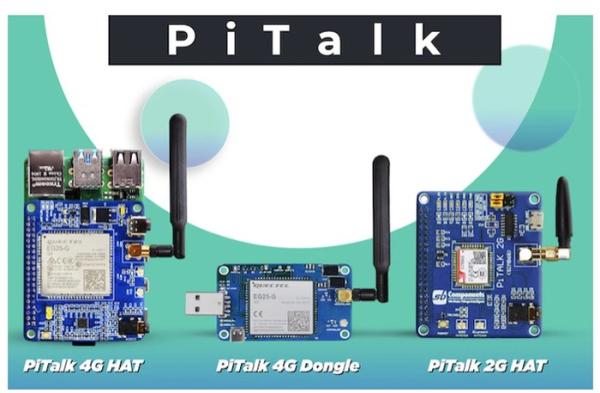 The PiTalk 4G HAT is capable of managing and controlling all of your Internet of Things projects and smart appliances say its creators. Powered by a Quectel EG25-G, and equipped with a LTE Cat 4 module intended for M2M and IoT applications. The PiTalk 4G HAT supports global bands, enabling you to deploy projects worldwide without the need to worry about being restricted by bandwidth. The PiTalk 4G IoT HAT is compatible with all Raspberry Pi mini PC versions and is available from just £20.

The internet of things helps people live and work smarter, as well as gain complete control over their lives. In addition to offering smart devices to automate homes, IoT is all the more essential to businesses too. In today’s time, organizations in a variety of industries are Increasingly using IoT to operate more efficiently. One of the popular choices to run IoT applications is Raspberry Pi. One of the issues we faced while working on IoT applications is the acute crunch of versatile devices compatible with Raspberry Pi in the market.

So, we came up with a solution. How about a device which is compatible with ALL Raspberry Pi variants and models and so versatile that it gives you the liberty to manage all your smart appliances that is not only compact and handy but cost effective too.”

If the PiTalk crowd funding campaign successfully raises its required pledge goal and manufacturing progresses smoothly, worldwide shipping is expected to take place sometime around February 2023. To learn more about the PiTalk 4G IoT HAT for Raspberry Pi project observe the promotional video below. Specially priced early bird pledges are now available for the interesting project from roughly $24 or £20 (depending on current exchange rates).

PiTalk is the most convenient IoT device that works with all variants of Raspberry Pi (model A, B and Zero). You can use PiTalk devices as standalone solutions to access internet, control smart applicances or develop your apps or can use them to crete hotspots through WAP technology and access internet anytime-anywhere.”

“PiTalk 4G is the most convenient IoT HAT that works with all variants of Raspberry Pi (model A, B and Zero). The users can also connect PiTalk with other iOS and Android devices as well. It is primarily designed to offer connection to your IoT projects and applications without requiring a Wi-Fi network or ethernet connections. With its enhanced capabilities, the PiTalk will be compatible with devices other than the Raspberry Pi. With simple interfaces and instructions, even a newbie will be able to enter the Internet of Things cosmos effortlessly and effectively. We’ve also made all of our software open source, in the spirit of the maker movement.”

For a complete list of all available early bird specials, stretch goals, extra media and specifications for the 4G IoT HAT for Raspberry Pi , jump over to the official PiTalk crowd funding campaign page by visiting the link below.

Forlinx’s SoM FETMX8MM-C contributes to the ever-growing list of tiny, Linux-friendly modules built around NXP’s i.MX8M Mini. This new board focuses on...