The PiTank is a web controller tank built for a competition at my school’s robotics club. The project took about two weeks to complete with all 5 team members participating in various aspects. Its main projectile are ping pong balls (up to 3).The firing mechanism is based on a spud gun. The PiTank is controlled using a web browser and is capable of real-time video streaming. It is powered by a Raspberry Pi and an Arduino, along with a few other components. Here is a picture of the completed project and a demonstration video.

The instructable itself will touch on every aspect of the build but will not go into the small details. However, links to other useful tutorials and reference guides will be provided. 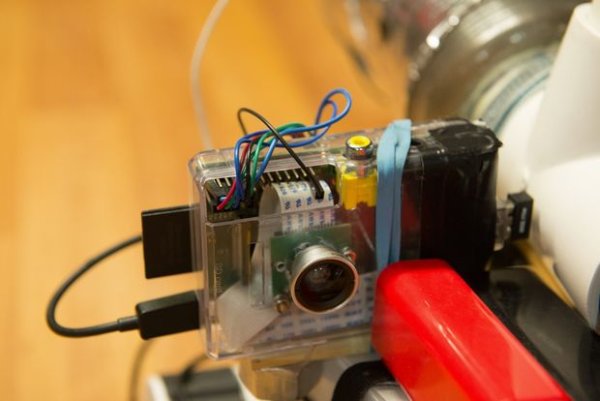 The list of materials is mostly guideline. I won’t go into every little piece that you’ll need for the project. You can substitute a lot of the material with what’s available in your area.

As for the cannon you’ll need

You’ll need a chassis to put everything in. I used this one . Make sure you get the 4WD as it has 2 more motors which gives it extra power. Unfortunately I got the 2WD version so my robot is a little slow.

You’ll also need some basic tools such as

There are 2 main parts to the robot :

The cannon is the coolest part of the project.It is made out of a hard transparent plastic project with some pvc pipes and attachments and some wooden sticks. It uses the same principle as a spud gun. The barrel is hot glued to the bottle. The wooden sticks serves as a mounting point for the fuel spray servo.

You’ll need to make 2 holes to insert the spark wires (image 2) and a bigger hole to spray the the propellant ( image 4). You might need to experiment a bit to find the correct size of the hole,since the air/fuel ratio is important to achieve ignition. For the propellant , I used Bullet Axe mounted on a servo ( see image 4). The top of the can should point towards the right side of the image. When the servo is activated, it will press down on the Axe can and spray into the ignition chamber.

We used a T attachement to build a simple magazine chamber ( see image 5), It can hold up to 3 ping pong balls.

We also put a screw in the PVC pipe to prevent the ping-pong ball from rolling into the chamber. You can see it in image 2.

Make sure you wear appropriate protecting when testing/building the cannon.

As mentioned previously, The RPi communicates to the servo board and to the Arduino. It also capture live video using the RPi Camera

The software setup is a bit more complicated than than the hardware. But I’ll go over it step by step.

Don’t execute the scripts yet. We have a few more things to setup .