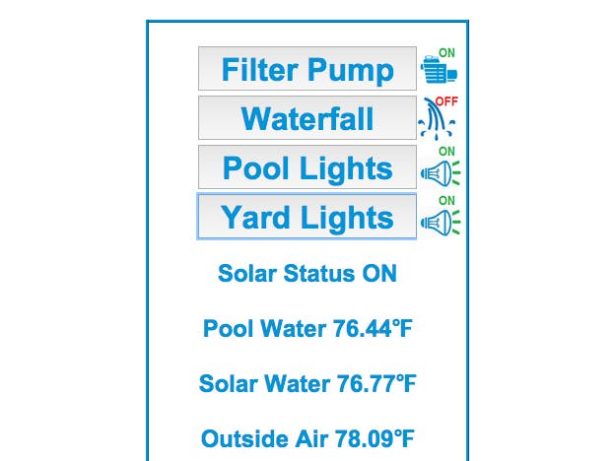 Twice, in three months time, the timer for my pool pump failed.  This inspired me to create this project. The cost of replacing those timers was over $120 and all I had to show forit was a timer that gave me very little control and a high failurerate. I also suffered a failure of thetemperature sensor on my solar water heater that cost an additional $30.

I knew that I could create a cost-effective automatedpool controller that gave me much more control over when my pool pump ran.  I wanted to have more variables as to when the pump ran instead of the simple time and day of the existing timer. I also wanted to be able to not only automatemy pool pump, but also monitor the status of various aspects of my pool environment. A further goal was to be able toaccomplish these tasks from anywhere using any device.

The project I have created is very cost-effective as it utilizesa Raspberry Pi running Windows 10 IoT Core, Relays, Arduino Mini Pro as well astemperature sensors, wiring and 3D printed components. I completed this project for far less money than I had paid for the two prior timers and solar temperature sensor. 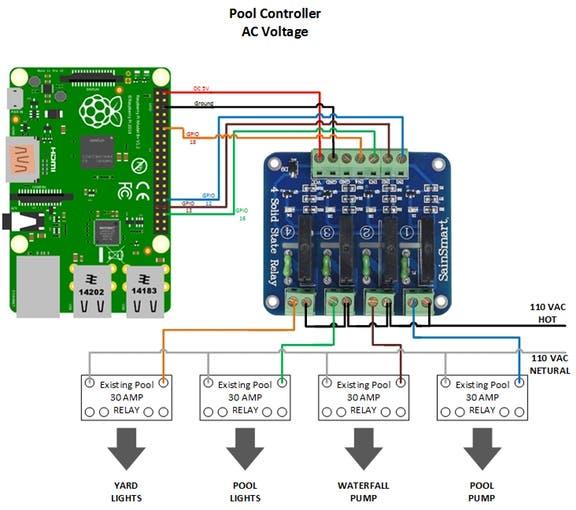 I started my project by controlling solid state relays frommy Raspberry Pi running Windows 10 IoT Core. These relays allow meto control my AC (Alternating Current) components such as the pool pump.  The solid state relays control the existing 30Amp AC relays that the old timer had utilized.  After designing and testing the circuit for the pool pump, I created additional functionality to control other AC components such as my pool waterfall, and my pool and yard lights. With this portion of the project designed, I could control all of these elements remotely.  No longer would my family members or I need to physically open the controlbox in order to turn on the waterfall, turn on the pool or yard lights or set the timerfor the pool pump.