Today I will be showing you another project you can do with a raspberry pi. i’ve seen some people doing this project in a really complex way and i was basically just wasting money on screens and additional components, i decided to come up with my instructable and show you guy how this job is reallyDONE!! 🙂 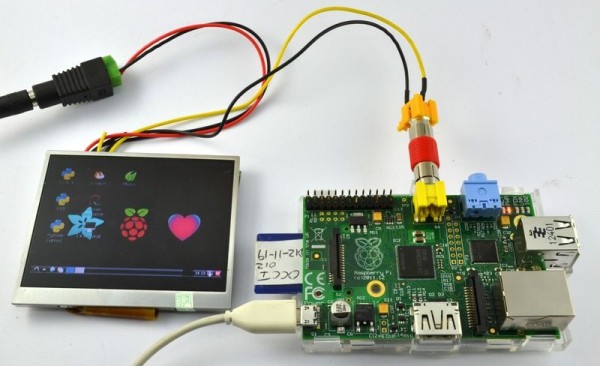 please VOTE or FOLLOW me. If you want to see some of my other cool fascinating projects i’ve created.(NOTE: i only do projects if i got more than 30 followers or at least a couple and if you have voted can you please frite VOTED inthe comments below ‘ve would really appreciate it )

I got most of my parts from amazon and ebay. however i did get the RCA coupler from my friend who also does projects with me (occasionally).
the next step…

so again i done another step on connecting a display. however this time some things will be different. the screen i’ve bought already had the connections i wanted in them. I would like to apologise because connecting displays is not kind of my thing so… you may have to use youtube or google. in recent years i was learning how to connect a display’s but thing didn’t always work out and i ended up wasting a heap loads of cash on just screens ($672 exactly).i met a guy called Tim who was doing these type of things such as connection displays.

Even the smallest of these displays will use enough power to warrant its own power adapter, especially as they generally do not use the 5V that the raspberry Pi uses. Often, they are designed to operate at 12V but will be happy at a range of voltages.

Check when you buy the display, what voltage it operates from. For some displays, a power adaptor will be included.
As an example, in this tutorial, we will use the Adafruit 3.5 inch display.

This display actually comes with two inputs (AV1 and AV2), I simply cut one of them off, to neaten up the leads. You do not have to do this, and you can use either lead when connecting to the Pi. Most only have one AV connection.

The unit comes in two parts, a control PCB and the display itself. They are quite delicate, especially the plastic ribbon that connects the two together, so handle with care.

I glued the control board to the back of the display, to make a single unit. If you decide to do this, just remember that if you need to separate them again, there is a good chance of breaking it.

The unit has a black and a red lead to supply the power. This can be between 6 and 12V. To make it possible to connect the bare leads to a power supply with a standard 2.1mm DC power plug, I used a Female DC power adapter. You can just pop the leads into the screw terminals, tighten them up and then use a regular DC power supply. Be very careful that the red lead goes to the terminal marked with a +. 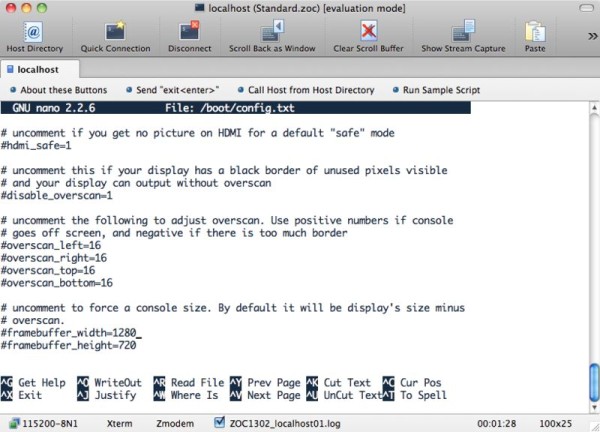 The display I used has RCA sockets, as they are intended to be connected to a video source such as a camera or in this case the Raspberry Pi via a cable. As you are probably going to have the display right next to the Pi, you do not really need a cable, and an RCA Male to Male adapter will allow you to connect it to the yellow socket on the Pi

i LOVE programming its just what i’m the best at so there wont be any problems for me who understand the way around the ”computer language”. I learnt my profession when i was a kid at a website called ”hackerforums” where there’s a tab named ”programming” and other tabs which are not necessary.

Turn on the power to the display and then power up your Pi. You should see the Pi start to boot up on the display. You will notice that the writing is pretty tiny and a little fuzzy.

We need to change the screen resolution so that we can see what is going on.

The native resolution of the display I used, is just 320 x 240 pixels.

To adjust the resolution, you need to edit the file: /boot/config.txt

You can edit config.txt on the Pi itself by running sudo nano /boot/config.txt or you can safely shut down the Pi, remove the SD card and put it a computer, theconfig.txt file is on the 60MB partion that should appear when you insert the card

If you are trying to edit it directly on the Pi, this may present a bit of a problem, if the whole reason for changing the screen resolution is to be able to read the text. You can either attempt to edit the file using the mini display, or connect remotely to your Raspberry Pi from another computer using SSH or, as I did here, using a console cable.

To edit the file, issue the command:

Find the lines that say:

but delete the # from the start of the command line.

the save and exit… You will find that a bit of trial and error will be required to get the right settings for your display.

With the overscan adjusted, the resulting screen is now looking pretty good.

Starting a Terminal session, the text is now quite easy to read.

YOUR DISPLAY SHOULD SHOW WHAT MINE DOES (the second image)

These changes to the settings will also affect (for the worse) the display if you connect up using the HDMI adaptor. To reverse the changes, just add a # character in front of each of the 6 lines that you changed earlier. after all the hard work i decided to use my raspberry pi as a computer so i decided to put my screen into a case then attach it to some acrylic sheet i bought of ebay. then i connected a portable ”battery charger” and used it as the source of energy and now it turned into ”laptop like” computer…thing? i also connected a wireless keyboard to it that already had a mouse pad on it so… i guess i’m done my job here.

Note: Try any or all of these at your own risk. I will not be responsible for any issues. Get...