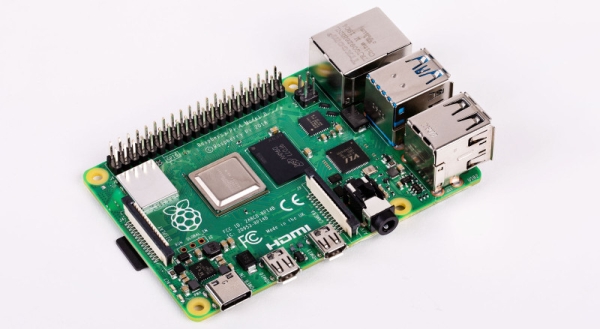 The CPU on the new and improved Raspberry Pi 4 is a significant upgrade. While the Raspberry Pi 3 featured a Broadcom BCM2837 SoC (4× ARM Cortex-A53 running at 1.2GHz) the new board has a Broadcom BCM2711 SoC (a quad-core Cortex-A72 running at 1.5GHz). The press literature says this provides desktop performance comparable to entry-level x86 systems.

Of note, the new Raspberry Pi 4 features not one but two HDMI ports, albeit in a micro HDMI format. This allows for dual-display support at up to 4k60p. Graphics power includes H.265 4k60 decode, H.264 1080p60 decode, 1080p30 encode, with support for OpenGL ES, 3.0 graphics. As with all Raspberry Pis, there’s a component video port as well tucked inside the audio port. The 2-lane MIPI DSI display port and 2-lane MIPI CSI camera port remain from the Raspberry Pi 3.

The Changes From The Old

For anyone expecting a drop-in replacement to the Raspberry Pi 3, there is one very significant change: the power port is now USB Type-C.

USB-C does this. With a USB-C power input, the Pi is not limited to the 500mA limit of any old power adapter. It’s a great design choice; if you asked why the original Raspberry Pi used a micro USB port for power, you could simply say it’s because every phone used one for charging, thus micro USB power adapters were everywhere. Now, most flagship phones use USB-C chargers that supply more power, and make a great power adapter for any single board computer. Of course, power may also be supplied via the 5V rail on the 40-pin GPIO connector, or through PoE with the relevant PoE hat.

For years, the question has been how to add a second, high resolution display to a Raspberry Pi. Yes, you probably could use composite output with HDMI or a 666 adapter board to give you VGA. That requires more effort than plugging in a second cable, so that simply didn’t happen. The Raspberry Pi 4 ditches the large HDMI port for two micro HDMI ports, with support for dual displays. Now, finally, the Pi is a true desktop replacement with support for more than one monitor right out of the box. 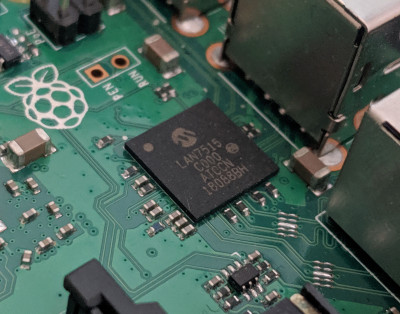 The reason for this lackadaisical performance on the USB and Ethernet ports was the combined controller. All Pis, except for the Zero and now the Pi 4, used a combination Ethernet and USB controller, in the Pi 3’s case, a LAN7515 chip from Microchip. This is a great solution to hang a few USB ports and Ethernet off of a SoC, but real-world performance is always less than the theoretical.

The Raspberry Pi 4 removes this combination Ethernet and USB controller. Now, finally, the Raspberry Pi has real Ethernet and USB ports. It has Gigabit Ethernet thanks to the BCM54213 Ethernet transceiver and USB 3.0 thanks to a VIA Lab VL805 chip that is attached directly to the PCI Express interface on the Broadcom SoC. While the Pi 4 only has two USB 3.0 ports, that should be good enough for most use cases. 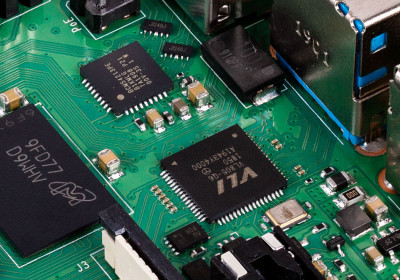 One of the biggest requests from the single board computer community for any board is the addition of a SATA port. It makes sense, in theory: if you want to turn a Pi into a NAS, just plug a hard drive into a SATA port. While it’s not a SATA port, the addition of USB 3.0 is huge; USB 3.0 offers nearly as much bandwidth as a SATA port, and USB to SATA converters are cheap and readily available.

Is This The Raspberry Pi You’ll Buy?

The addition of a second HDMI output is sublime, and turns the Raspberry Pi from a computer that would be a capable shop or workbench computer into something that could be considered a desktop replacement. The addition of USB 3 and improved USB and Ethernet bandwidth is exceptional, and as always wireless in the form of WiFi and Bluetooth 5.0 is a welcome spec. However, and there’s always a however, these small changes — especially changing from a single HDMI port to dual micro HDMI ports — will slightly interfere with existing enclosure solutions.

This is the Raspberry Pi you’ll be buying from now on, or at least for the next few years. It’s great, but you may want to think about spending the extra twenty bucks and upgrading to the 4GB model from the outset.

13th November 2018 – FTDI Chip has introduced the USB power delivery technology necessary to go beyond the powering of...