As an astrophotographer, it is good to know the sky conditions overnight. We set up our telescopes in the early evening. The telescope and its mount automate the process of taking pictures. Many images are captured while we sleep. In the morning, we want to evaluate the images captured overnight, to assess their quality. It is helpful to know whether clouds or other phenomena interfered with our imaging session. Also, it is good to know the accuracy of weather forecasts for future reference. Many people also like to capture meteors (shooting stars), aurora or other sky phenomena overnight. Here are the requirements: 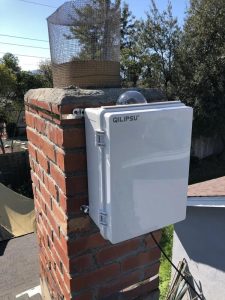 Some of these requirements will be met by the hardware, others by software. Bash scripts and Python will be used for the software.

Here is a link to a video made using this camera.

Here’s what I used. The links are to the products and sources I purchased. 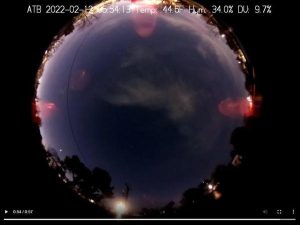 Here is a sample still image from the camera. The titles are mostly self-explanatory, except for “DU” which is disk usage on the RPI, so I know when the disk is getting full. 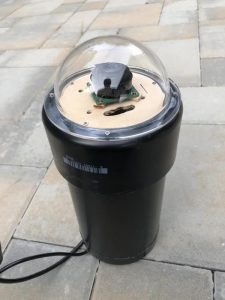 We are using a Raspberry Pi 4B with the HQ camera. Previous versions of the Raspberry Pi camera are not really capable of low-light photography unfortunately. I learned this the hard way.

Version 1 was housed inside a 4 inch black ABS tube with end caps. This works, but it has some drawbacks. It has to be glued or calked together to be weatherproof, and this makes it very difficult to take apart and service. It is mainly for this reason I decided version 2 would be inside a weatherproof enclosure with a door that is easy to open and close.

Step 3: Set Up Your Raspberry Pi 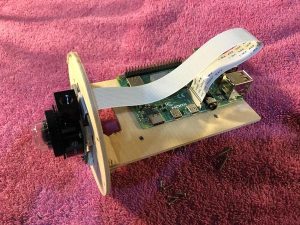 Nothing special to set up the Raspberry Pi, just install Raspbian and enable the camera. I made the wooden support structure for version 1 to hold the camera and RPI inside the ABS tube. The end plate (round plate) was fastened to the ABS tube end-cap using screws. The plastic dome was then fastened to the cap using silicone calk and screws. This version needed two cables, one power cable (USB-C) and one ethernet cable.

We decided to use an enclosure that is weatherproof, yet can be easily opened and closed. This makes it much easier to make changes and service the camera. I also wanted this version to use fewer cables. 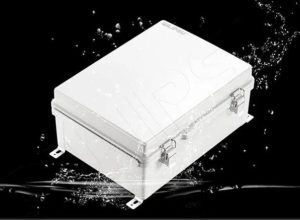 The enclosure I chose is a bit large, but it is the smallest one I could find which met the requirements and had a suitable surface to mount the plastic camera dome. I did not want to mount the dome on the door for various reasons. The large size does have some benefits since it is spacious and easy to work in. The plastic mounting grid is removable with four screws. 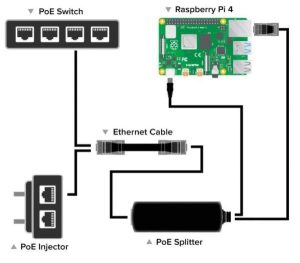 In this version, we are powering the Raspberry Pi using POE (power over ethernet). This allows there to be only one cable from the camera to the house network. You see the POE splitter at bottom. The PoE switch I chose provides more power (up to 60W) than I will need. 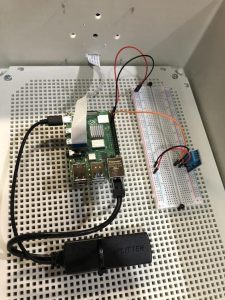 We are adding a temperature and humidity sensor, on the bread board to the right. This is the DHT11 sensor.

Once we finalize the sensor configuration, a permanent board will be made for them. 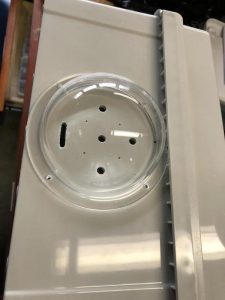 I had to notch some of the enclosure to fit the dome flush with the edge. I drilled a few holes for cooling. Unfortunately these also allow some red light from the RPI LEDs into the dome, this is visible in the pictures. This can be eliminated by blocking the light from the LEDs.

There are two environmental problems with this type of camera.

So far, I have only seen frost on a night where we had below freezing temperatures. This is somewhat rare for my area, so this problem is not urgent for me. YMMV (your mileage may vary) 🙂

I am definitely concerned about overheating inside the enclosure, especially during the summer months where we have been getting temps over 100F fairly often. From the reading I’ve done, the RPI is only good up to about 150F ambient. I figure that will easily be exceeded in the summer if I don’t do anything to prevent it.

I am in the process of adding a cooling fan for the enclosure, more on that later.

The bash and python scripts I wrote to run the camera are in Github. The code isn’t super clean, but it works. I use a cron job to run the bash script “allsky_new” once per minute. The crontab entry is just five stars followed by the full path to the script, for example:

That script invokes the python script. The other script “daily” can be run either manually or via cron. I’m currently only running it manually since I don’t need to generate the video every day. I’m running Apache on the RPI with a simple web page to display the current image and movie. That way you don’t have to download the images from the RPI. There are of course even more sophisticated ways to do this.

AAEON, a leading manufacturer of AI and IoT platforms, has worked with partners and developers to create solutions designed to address...