Summary: In this Instructable we look at how to build more reliable computer systems using WatchDog timers. We show how to set up and use the Raspberry Pi and Arduino internal watchdog timers. We also explain why an external WatchDog Timer is a better choice in many, but not all, systems.

Step 3 – How to Set Up the Arduino Internal WatchDog Timer

Step 5 – Adding an External WatchDog Timer to your Project

Step 6 – Suggestions for Educators and Conclusion

In this Instructable you will learn how: Computers sometimes lose their way. A power glitch, RFI (Radio Frequency Interference), hanging peripherals, or just plain bad programming can cause your small computer to hang causing your application to fail. It happens all the time. How often do you have to reboot your PC? Not very often, but once in while your Mac or PC will freeze making you have to power cycle the computer. Raspberry Pi’s will sometimes freeze because of a task not freeing up sockets or consuming other system resources and from power supply fluctuations. Arduinos sometimes freeze because of brownouts on the power line or a short power interruption or because of running out of system resources such as RAM and/or stack space, which is a very limited resource in an Arduino. Sometimes even programmers (gasp!) make mistakes.

See the WatchDog Timer and Computer Block Diagram above.

In small computers, you can give your device the chance to recover from faults by using what is called a WatchDog Timer (WDT). A WDT is an electronic timer that is used to detect and recover from computer malfunctions. If the computer fails to reset the timer (also called “patting the dog”) on the WDT before the WDT timer expires, the WDT signal is used to initiate either corrective actions or simply to reboot the computer.

Will the use of a WatchDog Timer make your computer project more reliable? The answer is yes. The proper use of a WatchDog timer can make your computer reboot when it gets lost. A known problem with some Python libraries on the Raspberry Pi is that some of those libraries don’t properly release sockets and after a long period of time (days generally – not weeks) the Raspberry Pi will hang or thrash because it is out of resources. A properly designed program could detect this and reboot the computer, but a WatchDog Timer can be used to cover a whole multitude of sins with one fell swoop.

In Project Curacao, we use a WatchDog Timer to reset the Battery Power Watchdog in case of a brownout or an RFI upset event.

In our WeatherPi Instructable (http://www.instructables.com/id/Create-Your-Own-Solar-Powered-Raspberry-Pi-Weather/) we use the WatchDog Timer to make sure the Raspberry Pi power is shut off after a “shutdown -h now” halt and also to detect the computer getting lost. More reliablity!

Step 2: How to Set Up the Raspberry Pi Internal WatchDog Timer

First of all a definition. Wto is defined as the maximum amount of time the WatchDog timer can count before it needs to be reset (in other words, when it will reboot the computer if the computer goes away. The BCM2835 System on a Chip that powers the Raspberry Pi has a WDT on board. It has 20 bits and counts down every 16us for a Wto of 16 seconds. This means you have to write to the internal WTD earlier than every 16 seconds, or the WDT will fire.

Now run “lsmod” and look for the line in below:

This verifies that the WatchDog module was loaded successfully. Now modify /etc/modules and add bcm2708_wdog

to load the module on boot by running the following command:

Then we use the watchdog(8) daemon to pat the dog:

The watchdog(8) daemon requires some simple configuration on the Raspberry Pi. Modify /etc/watchdog.conf to contain only:

To set the interval to pat the dog every four seconds: interval = 4

Whew! This sets up the internal Raspberry Pi WatchDog.

To test the Internal WatchDog, set it up as above. Next, edit a file called forkbomb.sh and put the following commands in the file:

Your Raspberry Pi will eventually reboot. A fork bomb works like this: The function is invoked twice and the pipeline is backgrounded; each successive new call on the processes spawns even more calls to “:” (the function). This leads rapidly to an explosive use of system resources, slowing response to a halt and killing the ability of the Raspberry Pi to pat the watchdog timer. If you don’t turn the swap drive off then the fork bomb has to fill that also, which makes the bomb much, much slower.

However, there are a number of problems with the internal WatchDog. The internal WatchDog does NOT power cycle the system. It reboots the Raspberry Pi. This means that it does not restart in all conditions. Especially in low power / brownout conditions often experienced with Solar Powered Systems (see our Solar Power Instructable here).

If the Raspberry Pi takes longer to bootup than 14 seconds (or to whatever value you set Wto), the WatchDog can fire which puts the Raspberry Pi in an infinite bootup sequence. This can happen. I have done it.

I have found the internal WatchDog to be unreliable. I never could track it down, but it feels like some kind of conflict between user space and kernel space. There are some situations where the Pi will be unresponsive, but the heartbeat may still occur. High load situations for example.

These are a few of the issues that can be resolved with an external WatchDog. However, it doesn’t mean the internal WatchDog is useless, just limited.

Step 3: How to Set Up the Arduino Internal WatchDog Timer

The Arduino is a much simpler machine than a Raspberry Pi. However, it is actually easier to hang an Arduino than it is a Raspberry Pi because all the code is single threaded on the Arduino. Single threaded means that there is only one program running at a time on the Arudino (with the exception of Interrupts, in a manner of thinking). The point is if you only have one thread running at a time, any hang up on that thread will stop the computer. Naturally, there are other problems that can cause your code to crash and Arduino to lock up. Timeouts on peripherals, power issues, RFI, etc., etc. Bad code using the millis() function is a classic problem. You need to handle the rollover at 49.5 days if you aren’t using a real time clock.

First of all a definition. Wto is defined as the maximum amount of time the WatchDog timer can count before it needs to be reset (in other words, when it will reboot the computer if the computer goes away).

There are a lot of things that will keep the internal WatchDog from working in the Arduino, so beware.

Here is a way to work with the internal Arduino WatchDog timer. First of all, the Wto of all the Arduino models is a MAXIMUM of 8 seconds. Keep that in mind. Having a longer Wto covers a lot more sins in my opinion (Wto is 16 seconds on the internal Raspberry Pi WatchDog – which still isn’t long enough for our taste), so the Arduino Wto is a bit short. We often have serial processes that run longer than 8 seconds in our designs. Yes, you can incorporate patting into the code, but when you are using external libraries, that is a pain.

To experiment with your Arduino WDT , build a new sketch in the Arudino IDE. WARNING: If you are using an ArduinoMega 2560 or similar device, you may “soft brick” your device. See comments in the problems section below. My Arduino UNO from SainSmart worked fine with this sketch. Start with

Run the sketch and let it run for 30 seconds or so. You should never see the “Arduino Rebooted” message again after reboot. Then, comment out the RESETWATCHDOG statement like this:

Now when you run the sketch, if your WatchDog is working, then you should see the Arduino Reboot every 8 seconds or so in the serial monitor. 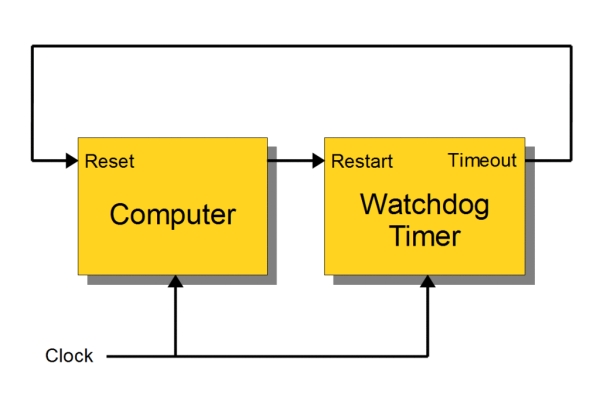 Use of the Arduino Internal WatchDogTimer is problematic at best. The Arduino WatchDog Timer has a Wto of 8 seconds so if you are downloading a new sketch and the old sketch has the WatchDog enabled, then you can get into an infinite reboot sequence. This is called “soft bricking”. The Arduino is then pretty much worthless (without a lot of work), but it is still running. WatchDog expires, bootloader starts, bootload works for a while, WatchDog expires, etc., etc. etc. Some boot loaders now disable the WatchDog appropriately, but beware there are a lot of Arduinos out there (like the Mega 2560 – of which we are big fans) that still don’t work. You can update the bootloader but it is not an easy job. This is a problem we have run into several times.

The original plan for the Analog-to-Digital Converter was to use the Dallas 1-Wire system and use the DS2450 1-Wire Quad...