I grew up in the dawn of arcade games, and living at the coast meant that I had access to a couple of decent arcades where I could play all the classics as they came out – Space Invaders, Galaxian, Defender, Moon Cresta, Galaga, Phoenix, Star Wars, Tron and Tempest all stick in my mind, but Mr Do! and Bubble Bobble were my all time favourites. 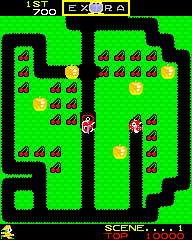 The Multiple Arcade Machine Emulator (MAME) has been around for years now, and has found its way into all sorts of places (a version was even available in the Apple Appstore just before last Christmas just in time for me to get an iCade). Of course the Raspberry Pi is quite capable of running many of the older games, which should include all the true classics. In this post I’m going to run through how I got MAME going on my RPi.

I’m using Raspbian now, and though it comes with sound working, it lacks some of the libraries that MAME needs to output sound. We also need a specific version of the compiler so:

There are quite a few flavours of MAME out there, and the main development has concentrated on WinTel. MAME4All has found its way onto ARM based smartphones and tablets, but it seems that AdvanceMAME is the way to go on the RPi. First download and extract the archive:

Then run the configuration and build process:

The build takes hours – so probably best to kick it off at a time when you’re not going to be using your RPi for a while – this isn’t a grab a cuppa situation. Once everything’s done it can be installed:

You should now be able to run advmame. On first time it will create default configuration files. You’ll need to edit one of these to get things working properly with the RPi display. Open up ~/.advance/advmame.rc and add a line:

For HDMI or for an NTSC TV:

This is where things get tricky. MAME provides a software version of the hardware that used to be in the game cabinet, but the software is covered by copyright, and most of the classics will be locked away for many years yet. Some olders games have found their way into the public domain, but many others are still locked away. There are of course plenty of sites on the Internet designed to help those with broken arcade machines give their intellectual property a new lease of life (and if you happen to come across some old arcade machine ROMs then they can be dumped out using an Arduino).

Once you have some ROMs (in a zip file) they can be placed in /usr/local/share/advance/rom/ or ~/.advance/rom/ and you can then run the game with advmame romname.

MAME isn’t the only show in town, there are loads of other gaming platforms out there, and many have emulators. I’d recommend a visit to Shea Silverman’s blog – the work he’s done on MAME helped me a lot in getting my own setup working, and he hosts ready built binaries for MAME and other emulators.

I quite fancy getting my games going with a proper joystick, interfaced via GPIO. There’s already some code to do this, but it seems that I let go of my trusty (and highly modded) Competition Pro 5000 joystick when I sold my Amiga – time for some eBay shopping.