Well I got the Pi working, so what next? After a tiny amount of pondering I decided to get it chatting to an Arduino using the serial interface. I’ll try and note down everything relevant so this’ll be as much a guide to doing it as a recording of what I did!

Before proceeding If you have a Pi, you might ask why on earth I’d do this – surely the Raspberry Pi is so awesome, the Arduino is just wasting space? The answer is that while technically you probably could get it to do everything, that doesn’t mean you should. The Pi is a high level computer, with lots of stuff happening in the background (like an operating system!) and isn’t well suited to things like sending precisely timed intervals to a servo, or reading times in between pulses from sensors. Admittedly where there’s a will there’s a way, but I prefer the ways that require as little will as possible, so my robots down the line will generally feature 1 or more Pi’s as the ‘brains’, with Arduinos doing the grunt work! 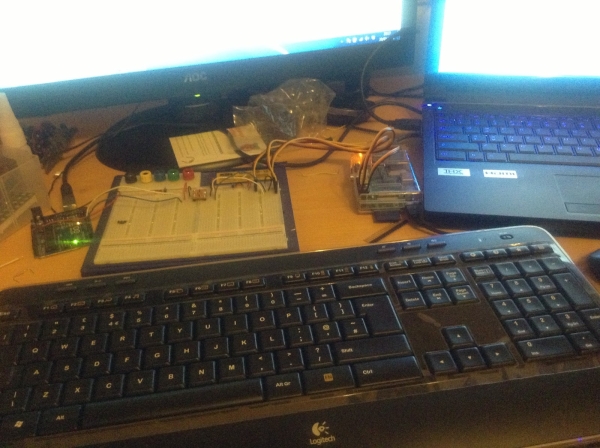 So, onto the actual job. The basic bits that needed doing were:

I used these web sites to gain enough info to do it:

In addition to a raspberry pi and an Arduino Uno, I also had a few wires, some jumper cables and crucially this logic level converter: https://www.sparkfun.com/products/8745. (although being in the uk I got mine from coolcomponents.co.uk).

This is the circuit I built in photo form – very simple really. It’s ultimatley just connecting the raspberry pi serial Rx/Tx to 2 pins on the arduino, however to avoid circuit damage there’s a logic level converter in the middle.

I’ll upload a circuit diagram if I manage to get visio up and running again!
Note: In case you didn’t know, with basic communications stuff,  ‘Tx’ means ‘transmit’ and ‘Rx’ means ‘receive’. The idea is to connect the ‘Tx’ of one device into the ‘Rx’ of another and visa versa so they can chat!
The Pi on the right looks slightly more complex than it needs to as I didn’t have any single wire jumper cables. So while I’ve connected 9 actual pins to the breadboard, I’m really only using: 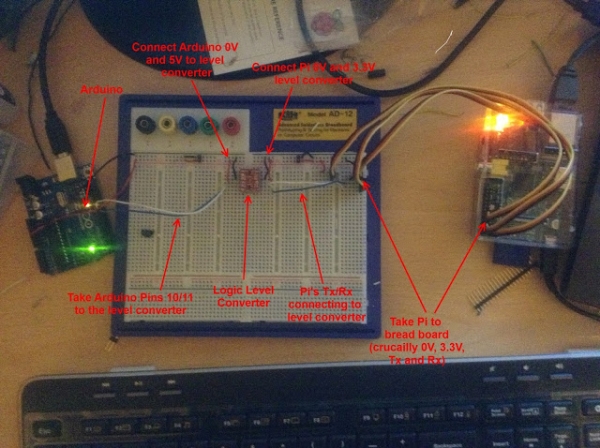 The Arduino is very similar:

I highly recommend testing the circuit with a voltmeter as you go. I verified the raspberry pi 0V/3.3V signals with a multimeter, and as you can see here.

A Better Solution The problem with rain sensors lies within how they are engineered. My particular rain sensor works by...