THERE’S A FRESH Raspberry Pi out of the microcomputer oven and it promises more performance over older models yet comes in at a mere $25, some £19’s worth of Blighty bullion.The Raspberry Pi Compute Module 3+ is the successor to the old Computer Module 3 – no surprises there – and comes in four variations; a ‘Lite’ model with no built-in storage, and models with 8GB, 16GB, and 32GB of eMMC Flash storage. The latter model will cost $40 (around £30) so hardly a wallet-walloping price. 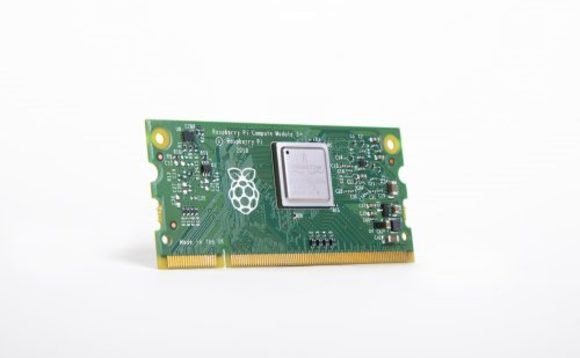 Thanks to the use of Broadcom’s 64-bit BCM2837B0 application processor and the use of 1GB of LPDDR2 RAM, the Raspberry Pi Computer Module 3+ delivers more performance but has better thermal control as well, with the microcomputer drawing heat away from the processor.

That drop-in nature is noteworthy as the Pi Computer Module 3+ is really aimed at people who want to plonk the microcomputer into all manner of equipment; think set-top boxes, sensor networks and industrial machinery that benefits from a dose of onboard computing.

That being said, we suspect there are a few hobbyist computer tinkerers out there who’ll be chewing over what they could use the Pi Compute Module 3+ for.

“Our aim for the Compute Module was to deliver the core Raspberry Pi technology in a form factor that allowed others to incorporate it into their own products cheaply and easily,” explained the Raspberry Pi Foundation.

“If someone wanted to create a Raspberry Pi-based product but found the Model A or B Raspberry Pi boards did not fit their needs, they could use a Compute Module, create a simple low-tech carrier PCB, and make their own thing.”

As much as it’s an upgrade on its predecessor, the Pi Compute Module 3+ is also the end of the Raspberry Pi family of microcomputers’ underlying foundations.

“Compute Module 3+ is, like Raspberry Pi 3B+, the last in a line of 40nm-based Raspberry Pi products. We feel that it’s a fitting end to the line, rolling in the best bits of Raspberry Pi 3B+ and providing users with more design flexibility in an all‑round better product. We hope you enjoy it,” the Foundation said.

As such, we can expect a next-generation Pis to make an appearance before too long, though the Foundation will keep the Pi Compute Module 3+ around until January 2026, so the microcomputer has plenty of life in it. µ