My progeny loves operating our Nerf TerraDrone named James. He is able to animate James while trying to stay out of sight so I got the idea of using the Pi Surveillance Project by Michael Castor from the April/May 2015 edition of Make Magazine to make a poor person’s FPV. This build will require the usual peripherals for working with the Raspberry Pi (HDMI cable and Monitor) plus an ethernet connection.

Here are the basic electronic items you will need:

(Note: more build items will be listed later though they are not critical) 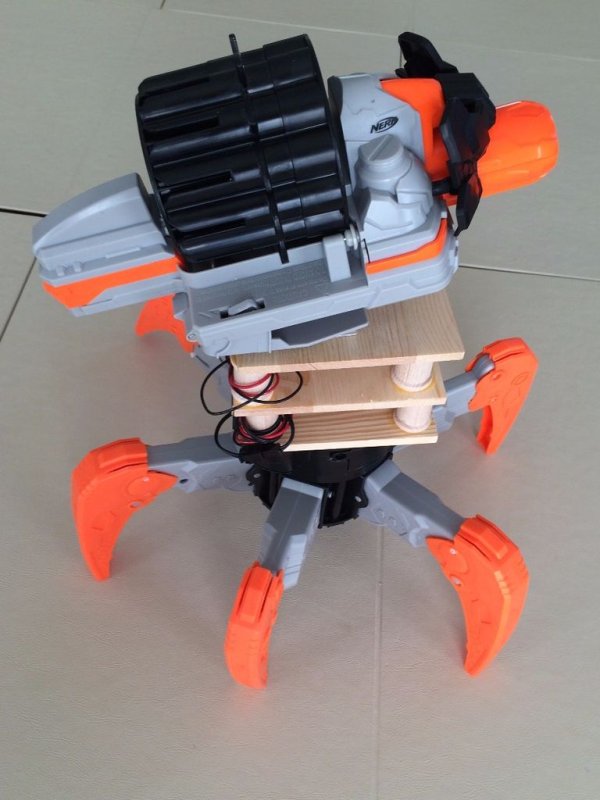 You will need to switch out the ribbon cable for a longer on. I used a 24 inch ribbon cable which might have been overkill but the standard cable was definitely too short to comfortably position the camera.

Set up the Camera Module Enclosure

Since this is a Nerf RC Toy that shoots the sponge darts, it would be wise to protect the camera from potential abuse. This enclosure I purchased from Amazon. While it’ll protect from casual contact and light impact, it will not hold up to abuse from the environment or excessive handling.

For this particular enclosure, I fitted the upper pegs through the nail holes on the board with the camera facing out. Then snapped the back piece in place. Voila. The cable will be dangling but no worries.

Again, due to the nature of the use and abuse this toy will be subjected to, I got an enclosure. It doesn’t protect from impact but from casual contact and light impact. Depending on your case, you may need to half assemble it then feed the cable through the top slot. With my enclosure, I placed the Pi in the bottom part. Fed the cable through the camera cable slot and then pinched the black tabs (like before when replacing the cable) and slid the cable into the slot making sure the metal side made contact with the metal pins in the port. Slid the black tabs back down to secure the cable and snapped the top part of the enclosure with the bottom. Voila.

Here is where I followed the Pi Surveillance article from Make step by step to download and burn Motionpie on the microSD card. Once I downloaded and unzipped Motion Pie, I used ApplePi Baker to burn the image onto the microSD card.

Plug an ethernet cable for network connection, HDMI Video (to follow along with the install) into your Raspberry Pi. You don’t need to connect a keyboard or mouse. It won’t work so don’t bother.

You should get your Motion Pie website and a feed from your camera. You will need to login. The default username: admin and the password is blank.

Click on the slider bar for settings. You will see the General Settings etc.. Go to the Video Settings: increase your video Frames Per Second (FPS) to the fastest it can go otherwise there will be a significant delay. I also renamed my camera to James II in this section.

Next, turn on the Advance Setting and configure the Network Settings. Enter your Wifi settings and then configure to a static IP and enter the IP address you found with Fing earlier.

Save your settings and reboot. Quickly disconnect your ethernet cable.

Now your camera is live and on your wifi.

Power it down and set aside.

Now for the challenging part: Modifying the RC TerraDrone.

The TerraDrone is connected with a barrel connector which we will need to replace. In this case, I replaced it which JST connectors. I recommend you start with the body and then do the head. When I worked on it, it was the reverse order and there was a lot of spitting and cursing. Hopefully, you’ll be able to learn from my mistakes.

Changing Connectors on the Body

First, separate the TerraDrone’s head from it’s body. We’ll tackle the body first (It’s easier). Be sure to remove all batteries and have the power button off.

Open up the case and unscrew the barrel connector. Note which wire is Positive and Ground. I cut and striped the wire and the extension wire and soldered them together. Protect the soldered wire join with heat shrink wrap. Do this again with the second wire. Feed the wires through the hole through top of the body and screw it back together.

You will be doing the same to the head. However, this part is a little tricky. Extending the Wires and Changing Connectors to the Head

This you will need to first rip out the plastic piece securing the barrel connector. This took me awhile. Don’t unscrew the top yet. There are a lot of cogs and pieces that will fall out. Also, do not unscrew the screw right next to the barrel connector column. Once you clear away the plastic, exposing the wires, cut the wires as close to the connector as possible. Now, carefully, unscrew the screws holding the head together (DO NOT UNSCREW THE SCREW NEXT TO THE CONNECTOR). Carefully set aside the parts and gently pull it apart. Loosen the wires and solder to the extension wires and heat shrink wrap the joins like you did before. Feed the extension wires through the barrel column. Carefully, put the head back together.

How to Make a Arduino+Raspberry Pi Robot Platform

This is not the definitive story on Pi and Arduino orchestration. Just my version. Step 1: Berryboot 1. Get Berryboot. ...