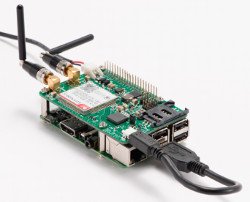 Japan-based MechaTracks has announced the first 4G LTE HAT board for the Raspberry Pi with full CAT4 operation, enabling 150Mbps downloads and 50Mbps uploads. Selling for ¥25000 JPY yen or €195 (about $222), the 4GPi is over twice the cost of existing LTE add-on boards such as the Cat.M1 and NB-IoT compliant Sixfab Raspberry Pi Cellular IoT Application Shield, which is limited to 375Kbps up and down. There are also several 3G Raspberry Pi add-ons such as Linkwave’s Pilot and MechaTracks’ own 3GPi.

4GPi with (left) and without a Raspberry Pi

The 4GPi is built around a SIMCOM SIM7600JC-H LTE Cat4 module. This supports LTE bands 1, 3, 8, 18, 19, and 26, which are commonly used in Europe, South America, and Japan, Korea, Thailand, India, Australia, and New Zealand. A Raspbian image is supplied to ease setup.

The 4GPi includes dual external antennas, and appears to integrate a micro-USB port. It supports any Raspberry Pi with a 40-pin connector and includes passthrough pins and a jumper switch to enable other HATs to be used on the same Pi. For example, the board is designed to work together with MechaTracks’ ADPi ADC board and RTC equipped SleePi power management board.

As noted in the TechRepublic story that alerted us to the 4GPi, telecoms such as Verizon are planning to decommission their 3G infrastructure at the end of 2019. With 3G on the way out and 5G on the way in, 4G will transition to supporting long-range wireless IoT applications, which typically use 2G, 3G, or LoRa today.

The 4GPi HAT will go on sale on Nov. 1 for ¥25000 JPY ($222). More information may be found on the MechaTracks 4GPi product page, which offers direct sales and links to RS Component and SwitchScience shopping pages.

Single board computer and software are development system for HMI

Creating a stable system and development ecosystem to reduce time to market for new applications Densitron, a creator of display...