The inspiration for the Raspberry Pi was born when Eben Upton was working with
computer science students at Cambridge University (see the Foreword for his own
account). He saw a need for incoming students to have greater opportunities to obtain
programming experience before they got to the university level. The first concept de-
signs for what would become the Pi we know now were born in 2006. Alpha boards
were demonstrated in late 2011, and the first 10 boards were auctioned off at the
beginning of 2012, raising £16,000.
The first batch of 10,000 Raspberry Pis went on sale February 29, 2012. Toward the
end of 2011, the SD card image for it had already been downloaded more than 50,000
times, hinting at its impending popularity. The two UK sellers at the time, Premier
Farnell and RS Components, sold out within minutes, with the latter reporting more
than 100,000 orders that day. Upton designed them for education—specifically
Python, hence the “Pi” part of the name. But the tiny board caught the eye of already-
experienced programmers and electronics hackers. As of this writing, a year and a
half after that first day of sale, more than two million have been sold.
And then roughly 1.95 million of them got stuck in an office drawer while their owners
gathered with hackerspace friends over beer and collectively lamented, “Yeah, I
bought a Pi, but I haven’t figured out what to do with it yet. I was thinking I might use
it to build a time machine and try to study the K-Pg event in person, but I’ll probably
just put XBMC on it.”
We wrote this book for you, the ones who haven’t decided what to do with your lan-
guishing Pis yet. Of course, if you do just want to install XBMC, you can refer to  Hack
#54 and then read the rest of the book to see the fun you’re missing. Alas, we haven’t
perfected the time machine hack yet, but follow @suehle and @spotrh on Twitter, and
we’ll let you know if we find a good source for flux capacitors.
We’re in what we hope is still the early stages of a return to a DIY culture. Those of you
deeply embroiled in it already, who have been to every Maker Faire and joined your
local hackerspace the day it opened, might insist that, on the contrary, we are deep
in the midst of said return. But it hasn’t gone far enough yet. Beyond our little maker/
hacker/builder/doer niche is still a wide world of disposable goods and electronics
consumption and dump-tion. Our devices are increasingly designed to do what the
designer intended without the flexibility to do what the owner intends, needs, or wants.
Further, they often are sealed up boxes, keeping prying fingers from ripping them apart
and rebuilding them to suit new visions.
The acceptance of closed, unhackable, unfixable goods is relatively new in the course
of human culture. It’s not so long ago—perhaps even your own childhood if you’re over
30 or so—in which we were happily building our computers from kits and taking the
TV to the repair shop instead of buying a new one. Devices like the Raspberry Pi help
bring us back to that better time when we knew (or could find out) what was happening
inside the things that we owned, when we could change them for the better and give
them new life when they broke down.
The first chapter of this book is for everyone with a Raspberry Pi; it gives you a basis
on which to build all of the hacks. From there, we move on to the larger projects that
implement all of those smaller hack needs. And in the spirit of the Pi’s original purpose, we hope you learn a lot. 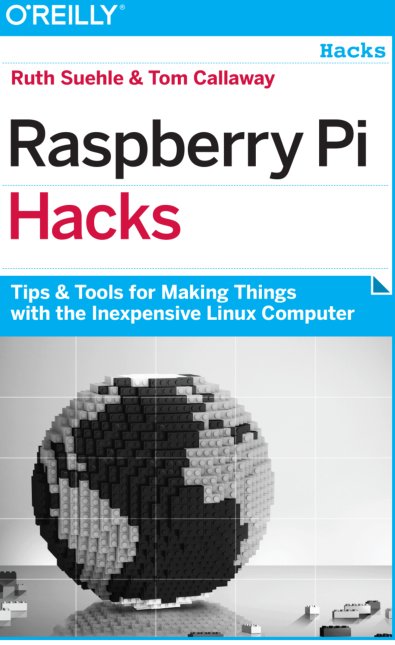 This project involves using a Raspberry Pi to drive 8 AC outlets which are connected to Christmas Tree light sets....