In my house, you can often hear someone shouting “Is the Internet down?” Sometimes it is but most of the time it’s a “user problem”. I decided to build a gizmo that would make it easy to tell whether the internet connection was working or not. Hence the Raspberry Pi Internet Monitor.

The Raspberry Pi Internet Monitor consists of a model B Raspberry Pi, a circuit for controlling the tower lamp, an illuminated switch used to indicate when the monitor is operational and gracefully shut down the Raspberry Pi when pressed, a barrier strip for connecting the circuit board to the tower lamp, and some jacks for connecting power as shown in the “Internet Monitor Wiring Diagram”. Two Python programs are used to monitor the internet connection and control the shutdown switch (for details on how these programs work see the last step of this instructable.)

The circuit for controlling the lamps uses opto-couplers connected in between the Raspberry PI’s GPIO pins and the tower lamp. This is needed because the tower lamps require more voltage and current than the Raspberry Pi can deliver. The simple circuit used is shown in the “Internet Monitor Tower Light Controller Schematic”. The circuit is built on an Adafruit half-size perma-proto Raspberry Pi breadboard printed circuit board as shown in the “Internet Monitor Circuit Board Layout” diagram.

I made this at TechShop. 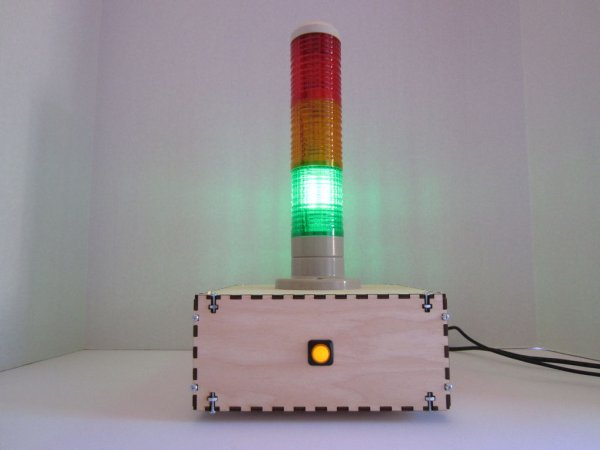 The following parts and tools are needed to construct the Raspberry Pi Internet Monitor:

Step 2: Cut the case parts with a laser cutter

The first step is to cut the parts for the case out of a sheet of 1/8″ (3mm) birch plywood. A 45 watt Epilog Helix laser cutter at TechShop was used to cut and engrave the parts. All of the case parts can be cut out from one 16″ x 16″ sheet of plywood.

The design is shown in the first diagram. The black lines will be cut by the laser cutter; the blue lines will be etched using a low power cutting setting; green text will be engraved; red lines will not be cut – they are included to show the outline of the parts. I used the color mapping capability of the Laser cutter to specify the settings for cutting and engraving. The setting used are shown in the right hand side of the “Color Mapping” screen capture.

The individual parts are:

The burn marks left by the laser can be removed with a gentle sanding using 120 grit sandpaper.

The laser cutting design files are in the ZIP file attached to this step. The file contains CorelDraw X5 (.cdr) and Encapsulated PostScript (.eps) files for the design and the file for loading the color mapping data for the laser cutter. See page 113 of https://www.epiloglaser.com/downloads/pdf/mini_he… for details on how to use color mapping.

Note: Since I was not able to provide an exact part number for the barrier strip I used in this project, you may need to adjust the design slightly. Barrier strips vary in size and mounting hole position so before you laser cut the plywood, make sure that the mounting holes in the design file match your barrier strip.

The first step in preparing the Raspberry Pi is to install and configure the Raspbian software:

Issue the following two commands to get the Python programs:

The third step is to configure the Raspberry Pi for use with your wireless network. Edit the file “wpa_supplicant.conf” with the command:

The file should look like the what is shown in screenshot 1. More details on how to configure the Raspberry Pi for different kinds of WiFi networks can be found on the Sparkfun website.

The fourth step is to configure the system to start the Python program that monitors and illuminates the shutdown button during the system boot process. Edit the file “rc.local” with the command:

Add the command below to the bottom of the file before the line that says “exit 0” and save the file.

The file should look like the one in screenshot 2.

The fifth step is to configure the system to run the Python internet monitoring program when the WiFi on the Raspberry Pi is up and running. Once the Python internet monitoring program is running, it periodically tests the connection to the internet and will illuminate the appropriate lamp. The command to start the program is placed in the “/etc/network/interfaces” file. Edit the file with the command:

Add the following command to the bottom of the file:

The file should look like the one in screenshot 3.

Configuration of the Raspberry is now complete.

The last step is to shutdown the Raspberry Pi with the command:

Using a soldering iron “tin” the end of the wires by applying the tip of your iron to each of the wires for a second or two, then touching the solder to the wire. The solder should flow freely onto the wire and in to the strands, coating it (photo 3).

Place a spade tongue terminal on the end of each wire and crimp the terminal using a crimping tool (photo 5).

Slide the heat shrink tubing over each of the ends of the spade tongue terminals and using a heat source (heat gun, matches, lighter, or candle) shrink the tubing (photos 6 and 7).

Cut two 6″ lengths of wire, strip both ends and solder one end of each to the inner terminals on the power jacks (photo 2). Make sure to connect the red wire to the center terminal.

Slide the heat shrink tubing onto the wires and move over the inner terminals (photo 3).

Use a heat source(heat gun, matches, lighter, or candle), shrink the tubing over the terminals (photo 4).

Cut off the male ends of the jumper wires (photo 6).

Using photo 9 as a guide to the terminals on the switch, solder the resistor to the positive (+) terminal (photo 10).

Attach and solder the red wire to the resistor (photos 11 and 12).

Cutoff the excess wire on the resistor.

Attach and solder the black wire to the negative (-) terminal (photos 13 and 14) using photo 9 as a guide.

Attach and solder the blue wires to the remaining terminals (photo 15).

Slide the heat shrink tubing over the resistor and over the exposed wires soldered to the terminals (photo 16).

Use a heat source (heat gun, lighter, candle, or match) to shrink the tubing.

The completed switch is shown in photo 17.

Step 8: Assemble and solder the circuit board

Strip the ends of the wires prepared in step 4 of this instructable and solder to the board as illustrated in photos 3 and 4.

Solder the wires from the power jack prepared in step 6 of this instructable to the board as shown in photo 5.

Carefully insert the LTV847 Quad Optocoupler into the IC socket (photos 6 and 7).

Break off 4 of the headers from the Break-away 0.1″ male header strip (photo 8).

Solder the header strip to the circuit board (photo 9).

Attach the Raspberry Pi to the circuit board using the GPIO ribbon cable (photos 2 to 6).

Attach the four wires with the spade tongue connectors to the barrier strip (photos 6 to 8).

Step 10: Attach the shutdown switch to the case

Remove the fastener ring from the switch (photo 1).

Insert the switch through the hole in the shutdown switch side panel (photo 2).

Slide the fastener ring over the wires with jagged edge facing the side panel and screw onto the switch (photo 3).

Before tightening the fastener ring, use the engraved lines on the outside of the panel as guides to make sure the switch is not crooked (photo 4).

Tighten the fastener ring to hold the switch firmly in place (photo 5).

Step 11: Prepare USB power connector and attach it to the case

Reassemble the USB gender changer with the Type B plug facing outwards and the Type A plug on the inside (photos 4 and 5).

Step 12: Attach the Raspberry Pi to the bottom panel

Insert the two screws from the bottom (you can use painter’s tape to hold them in position if your hands are not large enough to keep a finger on each screw head) (photo 2).

Place a nylon spacer on each screw (photo 3).

Place the Raspberry Pi onto the screws (photo 4).

Place a nylon washer onto each of the screws (photo 5).

Screw a nut onto each of the screws and tighten enough to hold the board firmly in place (photo 6). Don’t over tighten the screws. 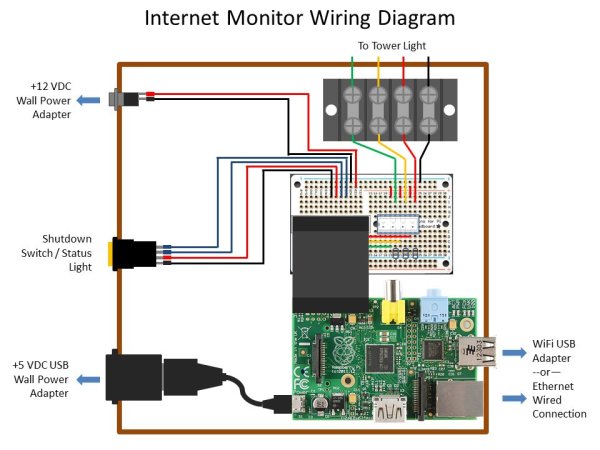 Step 13: Attach the circuit board to the bottom panel

Insert the five screws from the bottom (you can use painter’s tape to hold them in position if your hands are not large enough to keep a finger on each screw head) (photo 2).

Place a nylon spacer on each screw (photo 3).

Place the circuit board onto the screws (photo 4).

Place a nylon washer onto each of the screws (photo 5).

Screw a nut onto each of the screws and tighten enough to hold the board firmly in place (photo 6). Don’t over tighten the screws.

Step 14: Attach the barrier strip to the bottom panel

Use ssh to talk with your Raspberry Pi.