My inspiration for making this was to help satisfy my curiosity about the behavior of my cats when I’m not home and to identify the local wildlife culprits that devour the plants in my garden. There are commercial products that can do this but I thought it would be fun to build one that works exactly the way I desire.

The Raspberry Pi executes a Python program that starts when the Raspberry Pi is booted and waits for motion to be detected by the PIR sensor. When motion is detected, the Raspberry Pi snaps a photo or records a short video and then uploads it to a DropBox account. The great thing about uploading to Dropbox is that the photos and videos are available to be viewed by the owner of the Dropbox account on any device (laptop, desktop, tablet, smart phone) from anywhere where internet access is available. When the upload is complete, the program sleeps for a few seconds and then waits again for motion to be detected.

There is an additional LED mounted on one of the side panels that is illuminated when the Raspberry Pi is connected to power.

A more detailed explanation of how the software works is provided in step 20.

The diagram shows the wiring of the various components to the Raspberry Pi.

The case for the camera was made with 1/8″ thick birch plywood cut using a Epilog Helix laser cutter.

I made this at TechShop. 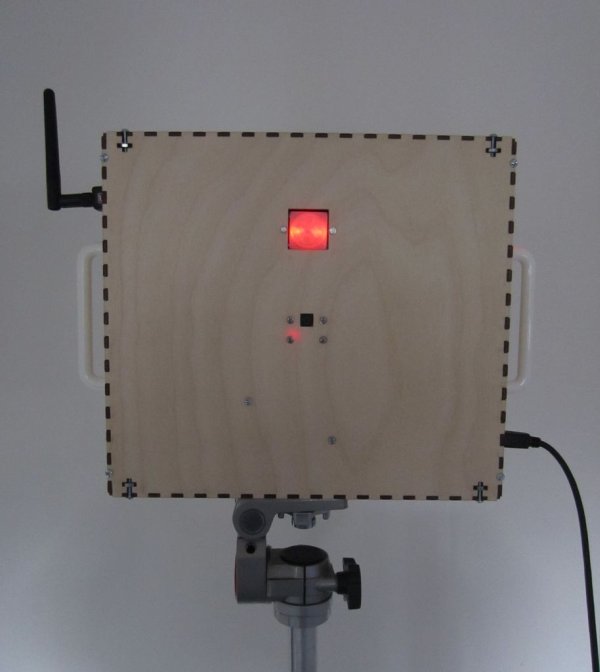 The following parts are needed to construct the Raspberry Pi Motion Sensitive Camera:

The first step is to cut the parts for the case out of a sheet of 1/8″ (3mm) birch plywood. A 45 watt Epilog Helix laser cutter at TechShop was used to cut out and engrave the parts. All of the case parts can be cut out from one 24″ x 18″ sheet of the plywood.

The design is shown in the first diagram. The black lines will be cut by the laser cutter; the blue lines will be etched using a low power cut; green text will be engraved; red lines will not be cut – they are included to show the outline of the parts. I used the color mapping capability of the Laser cutter to specify the settings for cutting and engraving. The setting used are shown in the right hand side of the “Color Mapping” screen capture.

All of the finished parts together are shown in photos 1 and 2.

The individual parts are:

Photos 16 and 17 show a closeup of the cutouts that will be used for the screws and nuts that hold the case together. How these are used are described in step 13.

The burn marks left by the laser can be removed with a gentle sanding using 120 grit sandpaper.

The laser cutting design files are in the ZIP file attached to this step. The file contains CorelDraw (.cdr) and Encapsulated PostScript (.eps) files for the design and the file for loading the color mapping data for the laser cutter. See page 113 of https://www.epiloglaser.com/downloads/pdf/mini_he… for details on how to use color mapping.

The completed switch is shown in photo 17.

Start the assembly of the LED power indicator with the panel mount LED (photo 1) and one 470 ohm resistor (photo 2).

The completed LED power indicator is shown in photo 16.

Assemble the left panel as follows:

The left panel is now complete.

Assemble the right panel as follows:

The right panel is now complete.

Assemble the bottom panel as follows:

The completed bottom panel is shown in photo 7.

In this step, you will create a Dropbox platform app. Creating the app will allow the Raspberry Pi Motion Sensitive Camera to be able to upload photos and videos to your Dropbox account.

The first step in preparing the Raspberry Pi is to install and configure the Raspbian software:

Issue the following two commands to get the Python programs:

The third step is to install the Dropbox uploader and configure it use the App key and the App secret from step 8 “Create the Dropbox Platform App”. Install the uploader with the following commands:

if this command fails, you will need to install git with the command below and then re-issue the git clone command above:

After installing the Dropbox-Uploader from git, change to the Python programs directory with the following command:

Issue the command below to configure the Dropbox uploader:

You should ignore the five things that are listed on the screen as things to do – you did those in the Step 8 of this instructable. What you do need to do is to enter the app key and app secret from step 8 and select “a” for the permission type (see the first arrow on Screenshot 1). After you hit enter on the permission type, you will be instructed to enter a web address into a browser (see second arrow on Screenshot 1). Carefully write down the web address and go to a computer with a web browser and enter it. After you enter it, the web browser will display a page asking you to allow the app to access it’s folder on Dropbox (screenshot 2). Click the “allow” button. The next web page displayed will let you know that the app was successfully connected to Dropbox (screenshot 3). Hit “Enter” as instructed on the Raspberry Pi screen. You will get confirmation that the setup completed on the Raspberry Pi as shown in screenshot 4. If it fails, it’s most likely due to mistyping of the app key, app secret, or the web address. Try again by typing in the command above and re-entering the information.

Next, test the connection to Dropbox by issuing the command:

This command will send a file containing the IP address of your Raspberry Pi to Dropbox. The output of the command is shown in screenshot 5. You should find the file in the application in the App folder in your Dropbox account.

The fourth step is to configure the Raspberry Pi for use with your wireless network. Edit the file “wpa_supplicant.conf” with the command:

Add the following lines to the bottom of the file substituting the name of your wifi network and your wifi password as shown and save the file. If you are unfamiliar with how to use the nano editor, howtogeek has a nice Beginner’s Guide to Nano.

The file should look like the what is shown in screenshot 6. More details on how to configure the Raspberry Pi for different kinds of wifi networks can be found on the Sparkfun website.

The fifth step is to configure the system to start the Python program that monitors and illuminates the shutdown button during the system boot process. Edit the file “rc.local” with the command:

Add the line command below to the bottom of the file before the line that says “exit 0” and save the file.

The file should look like the one in screenshot 7.

The sixth step is to configure the system to run the Python camera program when the WiFi on the Raspberry Pi is up and running. When the Python camera program is running, it waits for motion to be detected and then takes photos or short videos and uploads them to Dropbox. The command to start the program is placed in the “etc/network/interfaces” file. Edit the file with the command:

If you want to have the camera take photos, add the following command to the bottom of the file:

If you want to have the camera record videos, add the following command to the bottom of the file:

Screenshot 8 shows what the file should look like when configured to take photos.

Configuration of the Raspberry is now complete.

The last step is to shutdown the Raspberry Pi with the command: Step 10: Mount the PIR sensor on the front panel

The mounted PIR sensor is shown in photo 7.

Step 11: Mount the Raspberry Pi on the front panel

Step 12: Mount the camera on the front panel

The completed front panel with the PIR sensor, camera, and Raspberry Pi is shown in photos 8 and 9.

Turning your Raspberry Pi into a personal web server

LAMP is an acronym that stands for LinuxApacheMySQLPHP and are components required to run a Dynamic HTML webpage. This instructable...