For a while now I have been playing with Multicopters, and whilst I prefer to make the models myself and fly them properly with a transmitter, I couldn’t help being interested in First person View (FPV) so I got a camera and transmitter and a small monitor. My first attempt didn’t end well I took off the model by sight and the monitor was in the back of the car. Then when I was happy I took my eyes off the model and looked at the small monitor, I flew for about 30 seconds then looked up…… I hadn’t got a clue where the model was! When I finally spotted it I couldn’t work out which way it was facing and flew it into a tree! 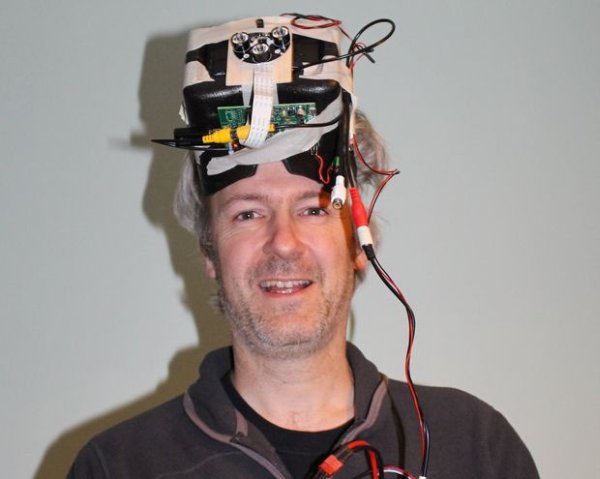 After that poor attempt I wondered if goggles would be a better choice so I had a look on line and found that the decent goggles are a lot of money, then I saw the Quanum goggles and at £32 a thought they were worth a go.

So when the googles arrived a promptly put them together and fitted the unit to my face (trimmed the polystyrene) I then connected the goggles to 12volts and to the RCA from the receiver. To my surprise they worked really well! However I had another plan! So because the goggles had a RCA input they could be connected to a raspberry pi and if you had a camera in the front you could maybe make a crude set of night vision goggles??

So for this project you need the following:-

Raspberry pi model a will do.

Now I might be a bit of a geek but I happen to have all the items I needed! So this was just for fun and to see if it worked and the whole unit was just taped together so it could be stripped down and the goggles used for their real purpose (FPV)

The raspberry pi I have is an original “A” model which I hacked to remove the RCA connector (not for this project) so I then had to solder a RCA lead onto the pads left. The other connections are the BEC wires which were soldered to the GPIO pins Pin 2 (or 4) for positive and pin 6 for negative, See the photos. The camera model was then connected to its connector.
At this stage I connected the raspberry pi to a monitor and wireless keyboard/mouse (the Raspberry pi “A” only has one USB connector so the wireless keyboard and mouse work well with just the one USB needed for the receiver) I then checked all bits worked by switching on and opening up the terminal and running

This turns on the camera so you get a preview but doesn’t take a picture.

You can also use

this gives you a preview and takes a picture if you press enter saving the picture with a file name my_pics + date/time stamp + .jpg

And if you want to take a video you could use:-

which takes a continuous video (time(-t) set to zero). And saves it as filename video.h264, you will however have to “Ctrl C” to stop the filming. 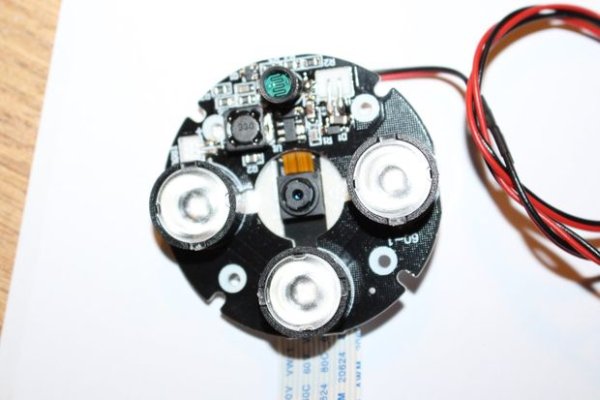 Once I was happy that everything seemed to work I then taped the lot together! (Like I said earlier this project is just for fun and not for keeps) so firstly I taped a piece of balsa wood onto the front of the googles, this gives me a nice flat base for the camera. The camera is taped to the IR light unit using foam tape, this was then stuck on the balsa wood making sure the light sensor (which turns on the IR LED’s) isn’t obscured. Next to be stuck into place was the raspberry pi which was taped underneath the googles and the connector to the camera was pushed home. To take the strain of the cables they were also taped to the side and the BEC taped next to them. And that is basically it the power cable for the googles and the wires for the 12volt feed to the IR LED’s and BEC to Raspberry pi were taped together to keep them neat. So I gave it a go, turned on the raspberry pi and let it boot up before putting on the googles then opened terminal and typed:-

Step 3: Lets Turn the Lights Out! The real test was with the lights out! So carefully I made my way to the light switch and turned then off, as soon as the light detector sees the drop in light levels it turns on the IR LED’s and the picture turns to grey but it is unbelievable! I had to take the googles off to make sure I was in darkness! The picture is brilliant and apart from the grey scale you really can’t tell its dark!!

So at this stage I then added an inline DVR recorder so I can make a video for instructables. This video recorder was something I brought for the Multicopters and the resolution is poor so the video is a bit rubbish but hopefully you can get the idea. I have added a few pictures from the camera.

And also a video using the pi camera on video mode.

In a recent instructable Indigod0g described a mini weather station that works pretty well, using two Arduinos. Maybe not everyone...