A new Hackster.io project published this month provides more details on a new Raspberry Pi power HAT built using PCB services from Seeed. Designed and built to power up a Raspberry Pi with 5V using a 3.7V Li-ion or LiPo cell. The custom-built PCB will function with both the wireless version of the Raspberry Pi Zero as well as the larger more powerful Raspberry Pi 3 Model B. 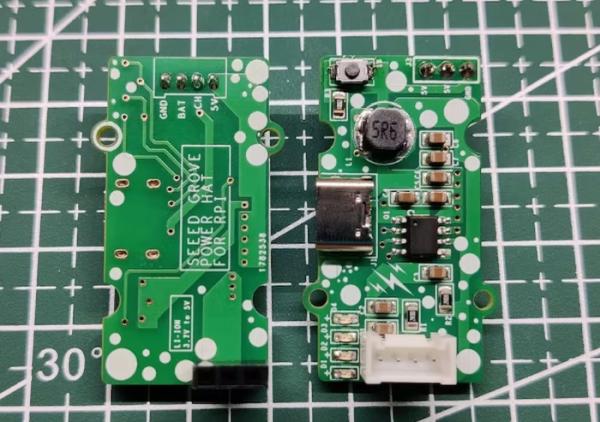 The tutorial over on Hackster.io provides details on how its publisher Arnov Sharma created the unique PCB using the Seeed Studio Fusion PCB Assembly Services. More information on the service is available via the link and video below.

“This Module boosts the 3.7V into a stable filtered noiseless 5V output for the Raspberry pi to work properly without any malfunction, it also contains features like thermal shutdown and power cut-off when cells get too close to their low discharge voltage. Seeed Studio Grove System is being used in this Module however because it’s not a Sensor board, it’s being utilized to add a battery to this module and distribute power through two remaining wires. Two wires are for Battery connection and the other two are for 5V Output and Charging IN.”

“As for its feature, it offers Low and High Cut Protection and even short circuit protection with thermal shutdown as well. It also has an indication setup for battery capacity level which is really handy as we can monitor the battery through it. This Hat can be added on the 5V and GND Port of Raspberry Pi, we can then add the Lithium Cell’s Positive and negative to a CON4 Wire Harness according to the Battery Connection labeled on the lower part of the board.”

” Seeed Studio’s Fusion PCBA service provides printed circuit board manufacture, components procurement, and assembly under one roof. This video shows how it’s done and lets you get up close with one of Seeed’s soldering lines.”

For more information on using the Raspberry Pi power HAT by Grove in your projects jump over to the official Hackster.io project page by following the link below.