I received my Raspberry Pi and decided I needed a case. I didn’t have much available to me in terms of laser cutters, 3D printers or woodwork skills etc. so I thought laterally. I’d previously had the idea of using the Pi as an emulator so I thought, “why wouldn’t a Pi fit in a Mega Drive case?”. About an hour and half later of taking my old Mega Drive II apart and thinking about the best ways of keeping everything tied down I had a very neat case for my Pi with (sort of) integrated USB hub.

For this Instructable you will need:

A Raspberry Pi with SD card inserted and OS installed (if you want to be pre-emptive with your case a credit card will help you see how it all goes together in place of the Pi),

A Sega Mega Drive/Genesis II (See the second picture if you’re unsure which version you have),

A screwdriver that can undo all of the screws on the console (they’re all the same size),

A micro USB cable and power adapter for your Pi,

An HDMI cable, the thinner the better (or an RCA connector cable would work too),

(Optional, although highly recommended) A 4 port USB hub which is no wider than 105mm (about 4 inches), no taller than about 9mm (0.35 inches) and ideally no more than 30mm deep (1.2 inches). I used an old Kensington one. If it has a short USB cable attached, like mine, you may also want a USB extender cable.

USB Mouse and Keyboard (or any other connection type that you can get to work), 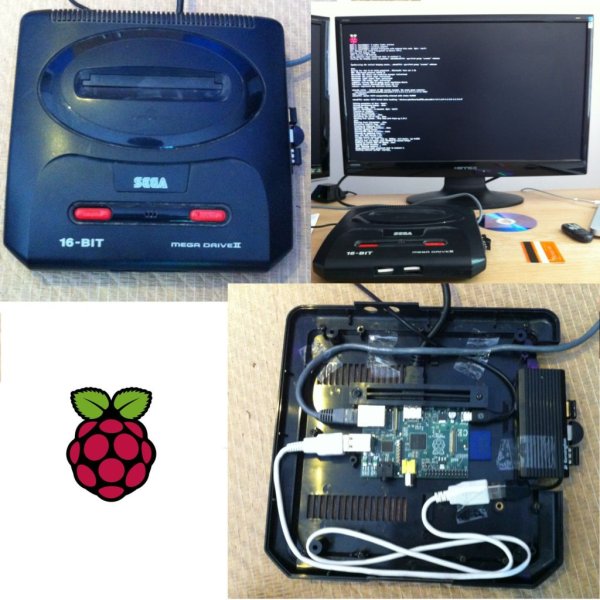 For this step you need to remove every screw you can see from your console (see video below for help), inside and out except the ones holding the cartridge bay to the top of the case (see picture 1),unless you want to of course.

Keep all the screws safe (see picture 2; I unscrewed 9 in total but the number and type may vary slightly by model).

I used this video to help me take apart my Mega Drive as it shows you where to look for all the hard-to-find screws. Ignore the bit after 2:40 where he starts soldering; this is unneeded.

In the end you should end up with (see picture 3):
2 pieces of metal,
1 motherboard,
2 shells of plastic,
a plastic bar and
a load of screws.

Step 2: Making room for the Pi and the cables. You should now have:
both halves of the plastic shell,
all the screws,
the plastic bar you removed earlier.
The next step is to remove the side panel from your console (located on the bottom half of the shell) where you would have originally plugged in a Sega CD or similar; this will be where the USB hub will go. It is likely that if it has never been removed before that it will be difficult to remove; don’t worry too much if it takes a while to remove as that is normal (See picture 1 and 2).
Put the side panel to one side. Unless you have a very shallow USB hub you will not be using it again.
Now you must remove the clear piece of plastic between the 2 buttons on the top half of the shell. It should just pull off. This step may not be wholly necessary but it helps to guarantee that the shells will close again with all the new wires inside (see picture 3 and 4).
Reinsert the 9 or so short, internal screws you took out earlier into their positions inside the bottom shell. This will form the basis of your cable management system (see picture 5 for positionings). Insert the Pi in the bottom half of the shell as shown in picture 1,2 and 3.

Plug in the HDMI cable. The Pi should lift slightly off the base of the case but ensure that it hasn’t moved in any other ways as shown in picture 4 (you will probably need to hold it in position).

Insert the plastic bar over the top of the HDMI cable and screw it down using the 2 long remaining screws as shown in picture 5. Make sure they are tight and that the Pi cannot move after they have been screwed down.

Place your USB hub as shown in picture 8. It probably won’t stay there on it’s own. I used sticky tape as shown in pictures 9 and 10 to secure it. Alternatively you could use glue (probably from a glue gun) or sticky pads instead. Be sure that there is enough room at the side of the hub for an Ethernet cable to get past if you plan on using one.

If your hub has a long enough cable (unlike mine) you can probably plug it in now. If the cable is too long or you require an extension USB lead wait and I will show you how to use the cable management system to keep the case neat.

Plug in your Ethernet cable bringing it under the HDMI cable but over the Micro USB cable as shown in picture 11.

To further secure your Ethernet cable you may want to tape it down like in picture 12.

If you have not already done so, plug in your extension USB cable or too-long hub cable at the Raspberry Pi end. If you are using an extension USB like I am, it may be easier to connect the extension cable to the hub last.

Wind the excess cable around the screw threads near the front of the case in a similar way to as is shown in pictures 13 and 14. If you have not already done so plug the extension cable into the hub. You may want to use some more sticky tape to further secure your extension cable.

This is where having the thin HDMI cable comes in handy. When looking at the case so that the HDMI is coming out of the Pi from the top, slightly to the right of where the HDMI cable naturally wants to go there is an indent in the case which should be semicircular. The other half can be found on the top half of the case. You need to bend the HDMI cable so that it goes into the indent and more or less stays there as shown in picture 15. This can be quite tricky.

If for some reason you can’t do this you could always cut a bigger hole in the case for the cable to go through but I’m trying to do as little modification to the shell as possible.

After you have got the HDMI cable in position you should have something that looks a lot like picture 16.

Step 4: Putting the Case Back Together and Booting Up! The next thing you need to do is place the top half of the plastic shell back on the bottom half and making sure the HDMI cable remains in place (which might entail pressing quite hard) flip the case over so it resembles picture 1.

You now need to put back your remaining 4 screws also shown in picture 1.

All you have to do know is plug in your mouse and keyboard and all the other cables and you’re away.

It should look something like picture 2 when it’s all running properly.

I would like to thank Sega for making such an iconic console which, as it turned out works as a Raspberry Pi case too!

I would like to thank the Raspberry Pi foundation for retweeting this design on Twitter and letting everyone know about it.

I would also like to thank anyone who has used this Instructable and I hope that your case is as good as mine!!