Looking for a first project to try out on a Raspberry Pi, I though what better than a Spectrum Analyzer? (Sometimes this display is erroneously referred to as a graphic equalizer–that let’s you change the sound, not display it)

I was able to get it doing 2048pt FFTs and decoding mp3s in real time, and while that shouldn’t be hard on a Pi considering plenty of 8bit uCs have been made to do real time FFTs, everything is done in Python, which makes it convenient (for me) to eventually add control via a web browser, sms, and other things. There’s not much room to spare, though, it chokes when I move the mouse.

Most of the code to do this is already available, my goal here is just to roughly document the steps to get this working, from the perspective of a first time Pi user. I also made some tweaks to the FFT analysis chunk to speed things up a bit.

Hardware: (thanks for the toys Adafruit!)

Rather than deal with separate LED strips for each column, I just looped a single 152 LED strip back and forth, securing it with zip ties to a baby gate. This wastes some LEDs as I’m not displaying anything on the turns, but you could avoid the LED waste by cutting the strip and soldering wires between the columns.

A good diagram for connecting the RGB LED strip to the RasPi can be found at adafruit’s site.

Grab the software and follow the instructions for getting the Pi able to output to SPI. It’s important that you use the hardware SPI because any bit-banging approach won’t be fast enough.

I added the install directory to my PYTHONPATH in bashrc so I could call the functions from anywhere.
inside .bashrc:

test out that the strip works by running the example code:

The xmas light code we’re going to download later wants to run as root, and when you run things with a sudo in front, the environment variables, specifically, PYTHONPATH aren’t transferred.

I had to edit /etc/sudoers by typing

and then added at the bottom

the first line is something we’ll need for the xmas light package to be installed later. These make sure those environment variables stick around when you run things as sudo.

To test that you have it setup right, close the terminal and re-open, then type

that should turn on the first 10 LEDs.

A final step is to make some modifications to speed up writing to the strip.

Inside ledstrip.py, make sure use_py_spi = True in the def __init__ line

Now inside LPD8806.py, we’re going to change the SPI speed to 16MHz

That print statement is there just to make sure everything gets set correctly.

One final change to the LPD8806.py file is in the update() function. For whatever reason, I noticed led.update() was taking a long time, upwords of 25ms. To get a good visual effect, I wanted my entire analysis and display loop to run at 20Hz, or 50ms per loop, and burning half that time waiting for the LED strip wouldn’t work. And strangely, at 16MHz, it should have taken less than a ms. 3 bytes per led, 152 LEDs, (3 * 152 * 8 bits / 16M) = .2ms! (not 25ms) When I put a scope up to the SPI port, each byte was coming out at 16MHz, but there was a 160uS pause after each call to self.spi.xfer2(). My solution was to collect the entire string of bytes into a buffer and only call self.spi.xfer2() once:

Some other people have struggled with this and got around it, check out the amazing POV video effect with a single vertical LED strip (sending data at 8MHz thru 20ft of cat 5!):

Now that we’ve got writing to the LED strip fast, and accessible from python running as root from anywhere, it’s time to install the fantastic xmas light orchestration software, and update it to control the LED strip.

Before running sudo ./install.sh, you should edit the file and change the INSTALL_DIR. Then run

I sadly ran into all sorts of problems. Most of the software installed (which takes a while), but I had to manually set environment stuff. The end of the bash script adds the install dir to /etc/environment. I also added it to my .bashrc at the end like so:

that second line is for the LEDs. The script tries to add the path variable to /etc/environment, but I had to add it to .bashrc. I really don’t know much about linux, so you should visit the google+ community to ask for help with the install. Make sure sudoers also has this line to make sure the environment variable sticks around when you run things as sudo.

As a first step, try to run a song and see if the code throws any errors:

Don’t hear any sound? I had to change my audio out from the default HDMI to the onboard 1/8″ jack:

I also had to turn up the volume 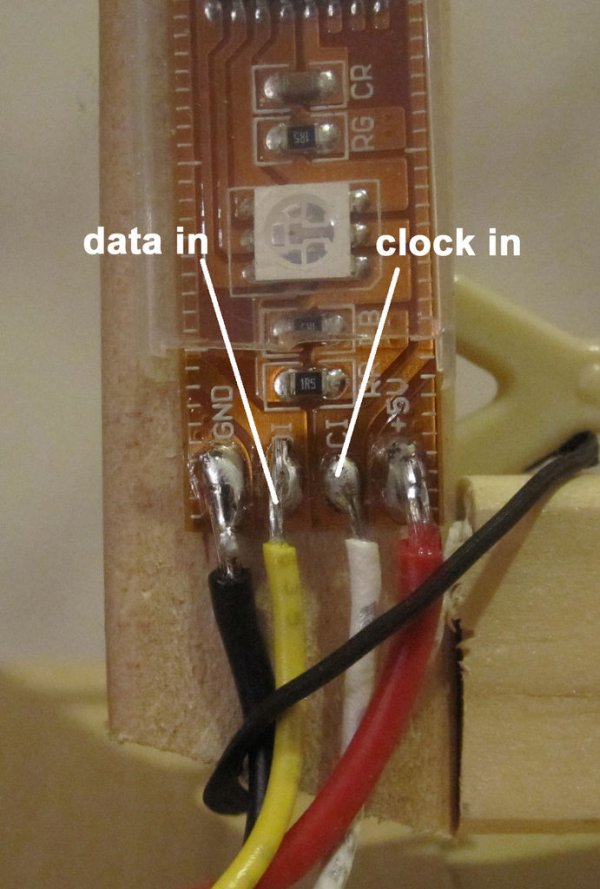 I made the following changes to /config/defaults.cfg:

I only have 5 columns, so I just truncated the list of outputs to 5 numbers.

I also changed the following

comment out custom_channel_frequencies. I just want to split the min and max frequencies evenly.

I was able to decode mp3s and play them at the same time with only a few glitches right at the beginning of the song. The base code has a feature where it writes out all the levels to a cache file so when it plays the song again it doesn’t have to run the FFTs. readcache 0 turns this off if you don’t want to have to delete the .gz cache it generates every time.

The main changes consist of stripping out the GPIO code and replacing it with code to send levels out to the RGB LED strip. The better way to do this would be to modify the hardware_controller.py file, but no matter what some changes to the original would be needed since I’m not just using on/off signals anymore.

I spent most of my time trying to optimize the speed of the calculate_levels() function. I found out that the line

some application, i.e. XBMC can show informations on a display by using LCDproc as driver. This post describes a way...