Not everyone has the luxury of making their way onto a Starfleet-operated starship but if you’re craving the experience, you’ll have to settle for the next best thing. Today we’re sharing an incredible LCARS interface project put together by Rob, also known as meWho_System47 over at Twitter, who worked with James Mitchell to make it run on our favorite SBC, the Raspberry Pi. 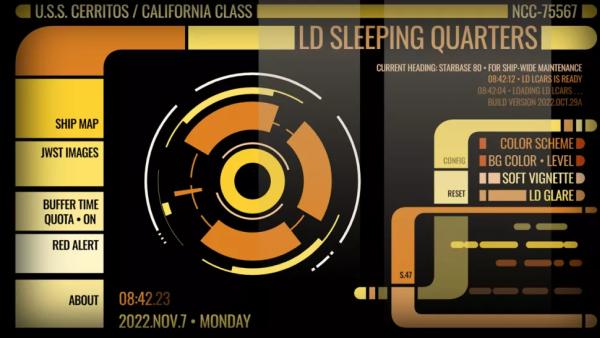 LCARS is an acronym from the Star Trek universe that stands for Library Computer Access/Retrieval System. The user interface design was created by Michael Okuda a a means to convey a complex computer interfaces, using backlit plastic panels. This interface can be seen on screens throughout the series and is loved by fans for its unique design. This custom LCARS UI project is packed full of features for the modern Star Trek fan and can even interact with real-world technology.

In the real world, Rob, who created the System 47 screensaver, shared some of the features but you’ll have to check it out yourself to dig into the meat of the project. It includes a cross-section, known as a Master System Display (MSD) of the USS Cerritos ship found on the animated series Star Trek Lower Decks. Users can find images from the real-life James Web Space Telescope (JWST) and interact with an alarming Red Alert system—just in case you come across some nefarious individuals while perusing imaginary space.

While anyone can interact with the custom LCARS interface on Rob’s website, he and James found a way to host it on a Raspberry Pi. The duo managed to hook up the interface to real LEDs so that pressing the Red Alert button will cause them to react. When the Red Alert system is activated, the LEDs flash and the alarm sounds will a pulsing effect.

The team explained that the LEDs are able to operate in sync with the application by using web sockets. The Python module Flask is used to create a website, using a copy of the Ritos website from Rob. Flask uses socket.io to wait for a trigger from the client. The client changes the alertStatus, which is sent to the Flask server via a websocket. The change is then broadcast to to all listening clients, one of which is a Raspberry Pi Zero 2W which is connected to a set of Pimoroni’s Mote sticks (PCBs with embedded APA102 RGB LEDs). The user interface is a Raspberry Pi 3B running the official touch screen, and Chromium browser running in kiosk mode to give it a true LCARS experience.

You can find more information as well as a video of the setup in action over at Twitter in a post shared by James.

If you want to experience this Raspberry Pi project for yourself, or maybe just play with the LCARS project, check out the original Twitter thread and head over to Rob’s website to click around and play Starfleet from the comfort of your browser window.

Are you having trouble finding ways to entertain your children at home and motivate them to learn new skills that will be...