Humidity, Temperature and Pressure are three basic parameters to build any Weather Station and to measure environmental conditions. We have previously built a mini Weather Station using Arduino and this time we are extending the weather station with Raspberry Pi. This IoT based Project aims to show the current Humidity, Temperature and Pressure parameters on the LCD as well on the Internet server using Raspberry Pi, which makes it a Raspberry Pi Weather Station. You can install this setup anywhere and can monitor the weather conditions of that place from anywhere in the world over the internet, it will not only show the current data but can also show the past values in the form of Graphs.

We have used DHT11 Humidity & temperature sensor for sensing the temperature and BM180 Pressure sensor module for measuring barometric pressure. This Celsius scale Thermometer and percentage scale Humidity meter displays the ambient temperature and humidity through a LCD display and barometric pressure is displayed in millibar or hPa (hectopascal). All this data is sent to ThingSpeak server for live monitoring from anywhere in the world over internet. Do check the Demonstration Video and Python Program, given at the end of this tutorial.

This IoT based project has four sections. Firstly DHT11 sensor senses the Humidity & Temperature Data and BM180 sensor measures the atmospheric pressure. Secondly Raspberry Pi reads the DHT11 sensor module’s output by using single wire protocol and BM180 pressure sensor’s output by using I2C protocol and extracts both sensors values into a suitable number in percentage (humidity), Celsius scale (temperature), hectoPascal or millibar (pressure). Thirdly, these values are sent to ThingSpeak server by using inbuilt Wi-Fi of Raspberry Pi 3. And finally ThingSpeak analyses the data and shows it in a Graph form. A LCD is also used to display these values locally.

ThingSpeak provides very good tool for IoT based projects. By using ThingSpeak website, we can monitor our data and control our system over the Internet, using the Channels and webpages provided by ThingSpeak. ThingSpeak ‘Collects’ the data from the sensors, ‘Analyze and Visualize’ the data and ‘Acts’ by triggering a reaction. We have previously explained about sending data to ThingSpeak in detail, you can check there. Here we are briefly explaining to use ThingSpeak for this Raspberry Pi Weather station.

First you need to create account on ThingSpeak website and create a ‘New channel’ in it. In new channel you have to define some fields for the data you want to monitor, like in this project we will create three fields for Humidity, Temperature and Pressure data.

Now click on ‘API keys’ tab and save the Write and Read API keys, here we are only using Write key. You need to Copy this key in ‘key’ variable in the Code.

Now we need this ‘Feed Get Request URL’ in our Python code to open “api.thingspeak.com” and then send data using this Feed Request as query string. And Before sending data user needs to enter the temperature, humidity and pressure data in this query String using variables in program, check in the Code at the end this article.

Working of DHT11 is based on single wire serial communication for fetching data from DHT11. Here we have used AdaFruit DHT11 library for interfacing DHT11 with Raspberry Pi. Raspberry Pi here collects the Humidity and temperature data from DHT11 and atmospheric pressure from BMP180 sensor and then sends it to 16×2 LCD and ThingSpeak server. ThingSpeak displays the Data in form of Graph as below: 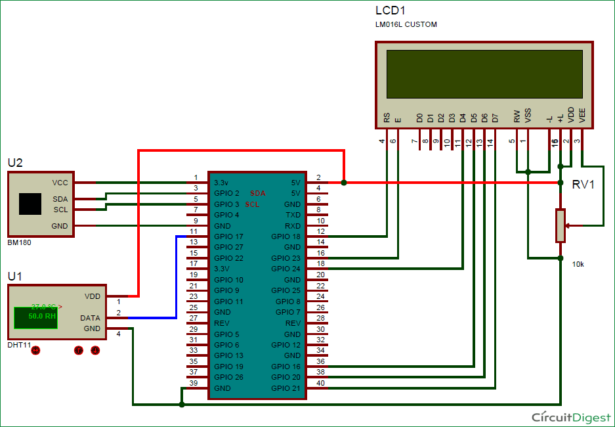