Let us build a robot that can be controlled using your mobile phone wirelessly over WiFi, Yes; a WiFi Robot using Raspberry Pi. Here, I will be using an App RootSaid – WiFi Command Center to send UDP commands to the listener (robot). The listener accepts the UDP packets and then use it to execute a set of instructions to drive the motor. So, How do you build a robot/wifi robot controlled from android smartphone? Or A Raspberry Pi WiFi Robot. Now let’s get started.

The first thing to do is set up the chassis for WiFi Robot using Raspberry Pi. You can build it the way you like. It should have enough space to fix our Raspberry Pi, L293D Motor Driver and a good battery.

In this project, I will be using a LiPo Battery. You can use foam board or light metal sheet for building the base. If you want you can purchase one from here. Here you will find a list of robot chassis you can buy to build a wifi controlled robot using raspberry Pi. 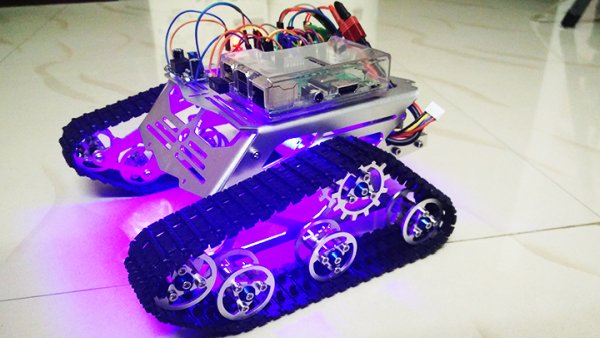 For our WiFi Controlled Robot using Raspberry Pi, I will be using a 12V Lithium Polymer battery to power up the whole robot, that is the Raspberry Pi and L293D Motor Driver to drive the motors. We can provide 12 V directly to the motor driver Board as it has an inbuilt regulator to power the motor and Circuit separately. But powering raspberry pi with this 12 V battery will fry the Chips. So you will have to use a regulator to step down the 12V to 5V and supply it to Pi. You can Purchase your Lithium Polymer Battery From Here. 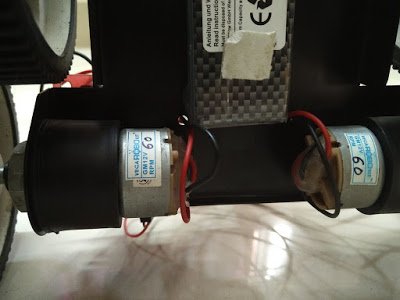 You can control DC motor using Raspberry Pi using a suitable Driver Board. In this project we will be using 2 DC motors. These DC motors are driven using a Dual H Bridge Motor Driver IC – L293D. More details on driving DC motors using L293D IC can be obtained here. If you are new to this, it is better to go through this proceeding to next step to get a better understanding of the project.

Get your Products – L293D Driver Board

To build a wifi controlled robot using a raspberry pi of course you will need a Raspberry Pi. Raspberry Pi is a low-cost single board computer which can be used for robotics, home automation etc.

Get your Raspberry Pi from Here

Download and burn an OS to a micro SD card and insert it into the raspberry Pi. In this project, I used Raspbian OS.

Now power it up. Now fire up your terminal and create a password for the user ‘pi’ by executing the command
sudo passwd pi
Now perform and update and upgrade by running
sudo apt update -y && apt upgrade -y

Raspberry Pi of your Raspberry Pi Robot should be provided with 5V and L293D Motor Driver with 12 V.

Step 7 – Setting Up the Listener

Now all you have to do is set up a listener on the Raspberry Pi WiFi Robot. Download the sketch from the link below and save it as a file named “controller.py”

RootSaid WiFi Command Center is an android app that can be used to control robots and home appliances over WiFi. All you have to do is connect your mobile phone to the network, enter the IP address and Port of the server (the robot) and control it using the arrow button. Click here to know more about this App 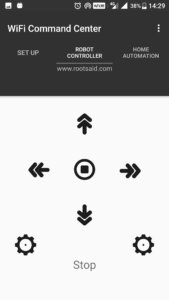