I’ve found a few posts out there that cover connecting a TMP36 (analogue temperature sensor) to the Raspberry Pi via the MCP3008 ADC (Analogue to Digital Converter) but I wanted to expand on the thing that I found confusing – the associated Python code that interfaces with the MCP3008.  By using the MCP3008 datasheet, some Python help pages and the official documentation for the interface library I got to the point where I could write & understand the code and what it was doing (sometimes posts can just be followed without really knowing what key pieces of a circuit or code do which really restricts you taking the concepts and building on them).

In addition to the basic operations of the MCP3008 with a TMP36 I’ll cover installing SQLite & Lighttpd, outputting temperature related data to a SQLite database and displaying this on a simple webpage.

You’ll need the following parts for this circuit:

We need to set up a couple of things before we start – enable the hardware SPI interface and install a python module to help with interfacing to the MCP3008.

NOTE: The documentation for the python module is listed in the references but it details the steps required to complete the following tasks.

All the steps below (and all further steps in blue) can be run via an SSH session to your Raspberry Pi.

Run through the three steps below to make sure your Raspberry Pi is up to date:

Ensure you have Python Dev package (and install it if not):

Open the current kernel module blacklist file and place a hash ‘#’ in front of the line blacklist spi-bcm2708.

Save and exit with Ctrl+X, Y to confirm and then Enter.  Reboot the Pi:

If you want to confirm the module has loaded on restart, you can list the status of the modules in the kernel:

You should see one result back with spi_bcm2708  at the start of the line.

Lastly we need to install the SpiDev Python module:

The SPI interface on the Raspberry Pi is enabled and the spidev module is available to Python.

The Raspberry Pi pin requirements are as follows:

The TMP36 pin three pin assignments are shown below (from datasheet):

The detailed point to point connections can be found in the table below.  A couple of notes about the MCP3008 pins:

The MCP3008 datasheet (linked in the references) has many sections that are useful for this small project but a few are definitely worth reading to help understand the Python code later (which I’ll expand on then).  These are table 5.2 on page 19 and all of section 6.1.  The table details the configure bits we will send to select our mode (single channel) and which channel will be used.  Section 6.1 details the use of the MCP3008 with Microcontroller SPI ports (which we use on the Raspberry Pi) – specifically the three 8 bit sequences that are transmitted from the Pi and sequences that are returned with data.

After originally posting this guide I found that adding a capacitor across Pin 1 (+Vs) and Pin 3 (GND) and across Pin 2 (VOUT) and Pin 3 (GND) stopped a small voltage drop that was occurring on the way to the MCP3008 and stopped the readings being affected by other elements of the circuit (touching/moving wires, adding additional components).

I’ll list out the basic code first then go through it in detail. This code will read the temperature and display the data every 1 second:

Save and exit nano (Ctrl+X then y).  You should be able to run this code as is and get the following output:

The shebang for python (allowing you to make this script executable without calling python first) is at the top and then the import of spidev (the python module installed above) and time (so we can use the sleep function).

Initiate the SPI interface and open 0,0 (this is CE0 on the Raspberry Pi – if you wanted to use CE1 you would use 0,1).  You can see the spidev devices on your system:

Here we are transferring data to the MCP3008 so that we get the required data back.  The spidev documentation for the xfer2 function states:

So we transfer values inside ([ and ]) and we’ll receive values back.  These values are in decimal format for our benefit but within the MCP3008 they obviously exist and operate in binary.  Let’s break down line 12:

spidata is the variable we want to store the returned data.

We then send three comma separated values to the MCP3008 .  These values are each one byte (8 bits) and are built up from figure 6.1 (page 21) of the MCP3008 datasheet (mentioned earlier)

NOTE: If the channel was 1 the value here would become 9 or 1001 in binary – checking the table this is the combination needed for CH1 (channel 1).

Finally we need to perform a bitwise operation on the value 8 (1000) because the second byte (8 bits) needs to have control bit selections at the beginning  (in the most significant bits).  The value (8) is really 00001000 in 8 bit binary and we need to shift our control bit selections to the left 4 places to give us 1000000.  This is what the <<4 does – it shifts the value left 4 places.  This is a useful trick to ensure our bits are in the location they should be without additional numerical calculation on our part. 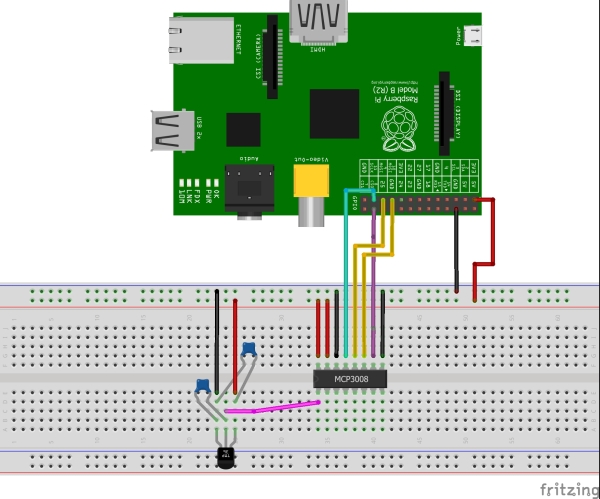 Let’s recap what our final value being sent to MCP3008 would look like if we could see it:

This is exactly what we need underlined above (look back at the MCU transmitted data in table 6.1)

These lines will manipulate the raw data in spidata so we just pull out the number we need (0-1023).  Let’s refer back to figure 6.1 (page 21) in the MCP3008 datasheet and look at the MCU received data and we’ll see the value we need (B0-B9 – 10 bits) is at the far right (the least significant bits).  Everything before that can be ignored.

So the second byte has the AND operator used to ensure we just keep the last two bits (the 2 least significant bits).  Then use the shift operator again but this time shift it 8 places so these two bits are on the left hand side of 8 zeros (1100000000).

Third byte (spidata[2]) – Finally the third byte is added to the result above to populate those remaining 8 bits – giving you 10 bits of information and a decimal number can then be calculated.

The variable data is then returned from the function.

Open a try and while loop so we can continually print the output to screen in the same script.

These call the function read_spi with the channel number then perform the calculation work turning the decimal value (0-1023) from the MCP3008 into a voltage (mV) and temperature (degrees celcius).

These just generate the output by printing the variables above and then sleep for 1 second.  The only noteworthy item being the binary  output (Data (bin)) formatting. 010b means pad the left with zeros, display a 10 bit sequence and convert to binary.

These final two lines wait for a keyboard interrupt (as the script continuously runs displaying output every second) and when detected closes the SPI interface cleanly.

Introduction When I was little, I used to push the garage door button from inside the garage and then run...