This tutorial covers the setup software and hardware to read and write the GPIO pins on a Raspberry Pi running the latest Raspbian operating system.

We will showing how to read from a physical push-button from Python code, and control an LED.

Open a terminal on the Raspberry Pi either via the desktop or by SSH’ing in (default credentials are pi/raspberry). 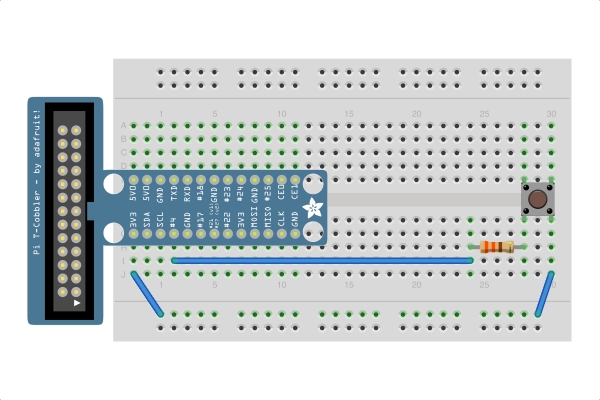 While the default Raspbian image does include the RPi.GPIO library, we would like to install a newer version to get access to a newer API for callbacks.

As of this writing the current version of 0.5.0a but you may see a more recent version later.

For the first part of this we will be using a single push button. Normally the top two pins and bottom two pins are not connected, but when pressing the button a connection is formed, allowing current to flow. We will put a 330 Ohm resistor in-line with the switch to protect the GPIO ping from recieving too much current.

I have used GPIO4 for this example, but any GPIO pin not otherwise in use will work fine, just update the pin number in later code samples.

The two 5V supply pins on the breakout board are very useful for powering complex chips and sensors, but you must take care to never accidentally use them to directly interface with the GPIO pins. The GPIO system is only designed to handle 3.3V signals and anything higher will most likely damage your Raspberry Pi 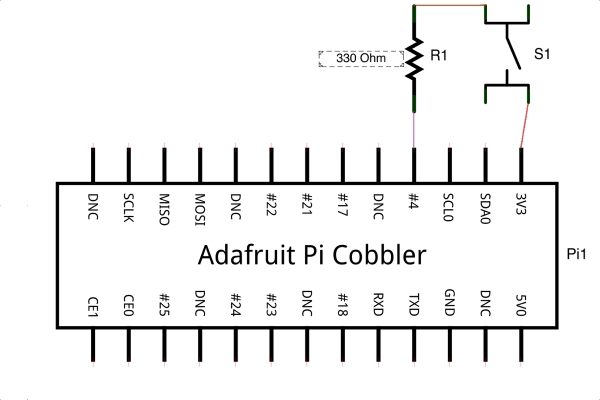 Step 4: Read the button from Python

Remember that you must run your interpreter as root (ex. sudo ipython).

First we need to configure the GPIO pins so that the Raspberry Pi knows that they are inputs:

The pull_up_down argument controls the state of the internal pull-up/down resistors. Looking back at the circuit diagram above you can see that when the button is not pushed, the GPIO pin is effecitvely not connected to anything. This is referred to as “floating”, and it means that the voltage there can be unpredictable. A pull-down adds an additional resistor between the pin and ground, or put simply forces the voltage when the button is not pressed to be 0.

With the pin configured we can now do a simple read of the button:

For more detail: Reading and writing from GPIO ports from Python