This project adds a whole new element to revitalizing retro hardware with a Raspberry Pi.

If you’re looking for a fun way to tweet with a Raspberry Pi and have an affinity for old-school hardware, look no further than this clever Psion 5MX-driven Pi project created by maker and developer Kian Ryan. Using a serial connection and a little bit of tinkering, he’s managed to operate a Raspberry Pi Zero and send tweets to Twitter using the classic Psion 5MX PDA from the late 1990s. 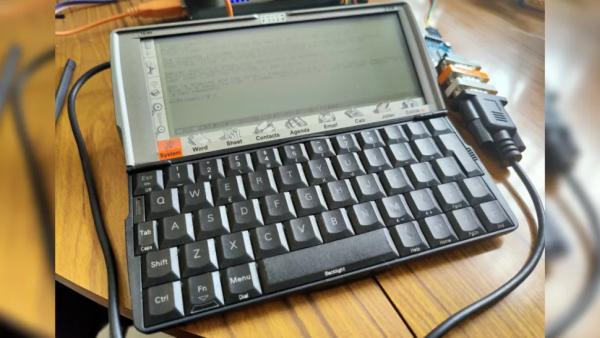 It doesn’t take much power to operate both the Psion 5MX or the Pi Zero, with the former running for quite a while using nothing more than a couple of AA batteries. Putting the two together just makes sense as a low-power system with a modern twist and great potential for portability.

Ryan has a history of working with microelectronics and 3D printing as evident by his catalog of past projects on his website. These projects are backed up with his experience as a freelance software engineer and consultant. Examples of his endeavors include things like this glowing skull printed with recycled filament and this touch-operated night light.

As mentioned above, the Pi communicates with the Psion 5MX using a serial connection. This is made possible using an RS232 adapter. The exact GPIO configuration is clarified in greater detail on Ryan’s blog, but it seems that it requires a bit of work to get fully set up.

Digging into the software is where the project gets really interesting. According to Ryan, he’s using the Hermes terminal program and referenced an archived link from the Wayback machine as his main resource. With everything put together, the Psion 5MX boots into the Raspberry Pi terminal, with the  interface clearly displayed on the old screen. We’re really scratching the surface here and highly recommend any interested parties delve into the project details for a deeper understanding of how this project operates as it took a lot of work and research on Ryan’s part to pull off.

If you want to recreate this Raspberry Pi project yourself or just see how it works, check out the Raspberry Pi Psion 5MX project page on his blog and be sure to follow Kian Ryan for more creative developments in the future.

In the current epoch, drowsy driver detection is the most necessary procedure to prevent any road accidents. So this project...