I’ve had a Siglent SDS1102CML two channel 100 MHz bench scope here for the last two years. I demand a lot from my test equipment so had low expectations when it arrived. After all, how good can a $359 unit be? Turns out, quite a good for the price. I reviewed it here. But the screen is smaller than most modern pro scopes with lower resolution than many would like. And 100 MHz just doesn’t cut it for a lot of applications. I figured Siglent was positioning itself at the low end of the market 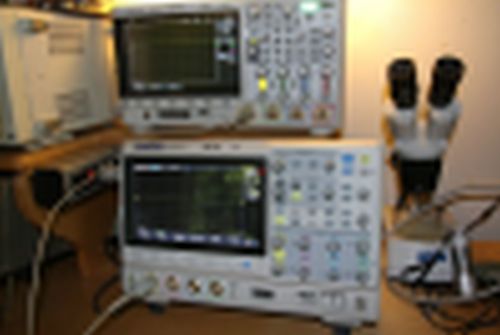 But the company just released a series of scopes aimed squarely at the market segment owned by Tek and Keysight (née Agilent née HP). The SDS 2000X family (gobs of info here) includes eight models that range from two channels at 70 MHz (for $885) to four channels with 16 digital inputs at 300 MHz for $2815 sans options. Those include an arbitrary waveform generator and decoders for I2C, SPI, RS232, CAN, and LIN. All of the units in this family feature a 2 Gs/s sample rate, 140 Mpts memory depth and 140,000 waveform/s capture rate.

Siglent sent me a SDS 2304X, which is the top of the line model with all of the options. This configuration sells for $3200 and is available from vendors like Saelig.

First, check out this picture. The scope on the top is Keysight’s MSO X 3054A, a 500 MHz unit, with four analog and 16 digital channels. I’ve had this for a few years and love it. The Siglent is beneath. It’s actually a little smaller than the Keysight but foreshortening deceives the eye.

The layout is eerily similar. Like the Keysight, all of the Chinese unit’s knobs can be pressed in to change some functionality. For instance, on both units pushing a vertical gain knob toggles the gain from the normal 1-2-5 sequence to a “variable” mode, where the gain is continuously adjustable. I don’t find it useful but perhaps it makes sense if one were using the unit for automated testing.

The Keysight’s knobs feel better, and the Siglent’s buttons have a little bit of a mushy feel rather than a sharp snap.

Other features are different – for instance the Keysight has twice the lower unit’s sample rate. It takes a wider range of probes.