In this RFID based Attendance System project, we will explain you that how can we authorize and count attendance automatically by using RFID cards. RFID Technology (Radio Frequency Identification and Detection) is commonly used in schools, colleges, offices and stations for various purposes to automatically keep track of people.  Here we will count the attendance of an authorized person by using RFID.

If you are not familiar with Raspberry Pi, we have created a series of tutorials to learn Raspberry Pi, with interfacing with all the basic components and some simple projects to start with, do check.

RFID is an electronics device which has two parts – one is RFID Reader and other is RFID tag or Card. When we put RFID tag near to the RFID reader, it reads tag data serially. RFID tag has 12 digit character code in a coil. This RFID is working at baud rate of 9600 bps. RFID uses electromagnet to transfer data from Reader to Tag or Tag to Reader.

Here Raspberry Pi 3 is controlling the whole the process of this project (User can use any Raspberry Pi Board). RFID Reader reads the RFID card ID, this data is received by Raspberry Pi through UART, then RPi validates the card and shows the results on LCD screen.

When a person put their RFID tag near over the RFID reader to scan, RFID reads tag’s data and sends it to Raspberry Pi. Then Raspberry Pi reads the Unique Identification Number of that RFID tag and then compares this data with predefined data or information. If data is matched with predefined data, then Raspberry Pi increments the attendance of the tag’s person by one and if matched is not matched then microcontroller shows ‘Invalid Card’ message on LCD and buzzer is beeping continuously for some time. And here we also added a push button to see total no. of attendance of all the students. Here we have taken 4 RFID tags in which three are used to record the attendance of three students and one is used as a invalid card. 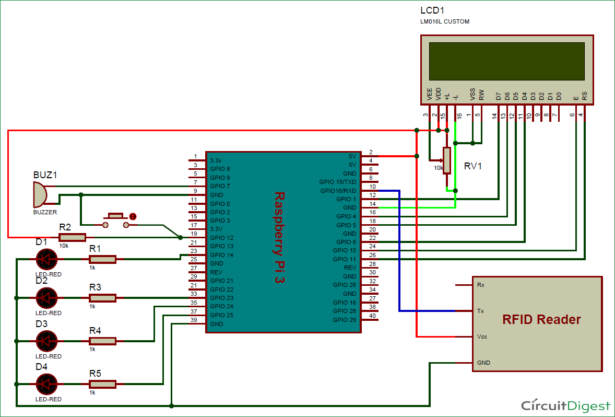 For more detail: RFID and Raspberry Pi Based Attendance System