As the new owners of Castle Technology Ltd, RISC OS Developments Ltd are proud to announce that RISC OS, the original OS for ARM processors is now available as a fully Open Source operating system (OS), via the Apache 2.0 licence under the continued stewardship of RISC OS Open Ltd. 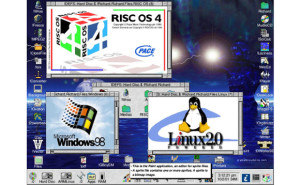 Of course, RISC OS has a wider scope than just the Pi, with support for ARM-based CPUs from the likes of Texas Instruments, Intel, Broadcom, Freescale, NXP and more.  Fuelled by the move to Open Source, this is expected to expand dramatically as the OS finds its feet on the broad range of ARM-based hardware.

Originally developed in Cambridge, England, RISC OS was the first operating system for the wildly successful ARM series of microprocessors.  Early versions powered Acorn Computers’ “Archimedes” and “RiscPC” series or personal computers, as well as the BBC A3000 range that found huge success in schools and businesses both domestic and internationally during the 1990s.

RISC OS was the “first home” for many famous software packages, including industry leading titles such as the Sibelius music processing family and the Xara range of graphics products.  It also famously powered the graphics and production of many TV shows during the 1980s, 90s and 2000s including household names such as “Who Wants to be a Millionaire” which was exported widely to the international market.

Subsequently purchased and developed by Castle Technology Ltd, RISC OS has seen constant development in the intervening years, bringing with it compatibility with a range of software, as well as evolving to support ever-increasing ranges of hardware.  Maintaining its minimalist hardware requirements, RISC OS provides “close to the metal” performance, making it ideally suited to the trend for single-board-computers epitomised by the Raspberry Pi.  Reaching a full, graphical desktop in just a handful of seconds, RISC OS is the perfect fit.

Of particular interest to many with be the inclusion of BBC BASIC, which was widely taught as the “standard” BASIC implementation in the UK during the 1980s and 90s.  BBC BASIC programs can still be run, “out of the box” on RISC OS, and unlike many flavours of BASIC, modern versions provide easy access to the hardware and I/O capability of computers.
This allows BBC BASIC to remain fresh and relevant for all manner of control projects on devices such as the Pi and its ultra-low-cost sibling, the Pi Zero.

RISC OS has been ably curated by RISC OS Open Ltd for the past 10 years, but it is only now, thanks to new owners RISC OS Developments, that the “Open” portion of that name can truly flourish.  RISC OS Open Ltd will continue to curate and host the master repository of the OS, working in partnership with RISC OS Developments to fund and develop ongoing RISC OS projects.

WAVETABLE GENERAL MIDI FOR EVERYONE

There are only so many ways to generate music with a computer, and by far the most popular method is...