During May we discovered that our resident pair of robins had nested in a blue plastic container inside our shed.

Once they had left, I put an old open fronted nest box on a shelf inside the shed, in the hope that they might return.

They did, and after a couple of weeks sitting on the eggs, we noticed a few days ago that the female was disposing of egg shell and starting to bring small morsels of food for the emerging chicks.

This is probably the pairs third brood this year. Will they try a forth time? 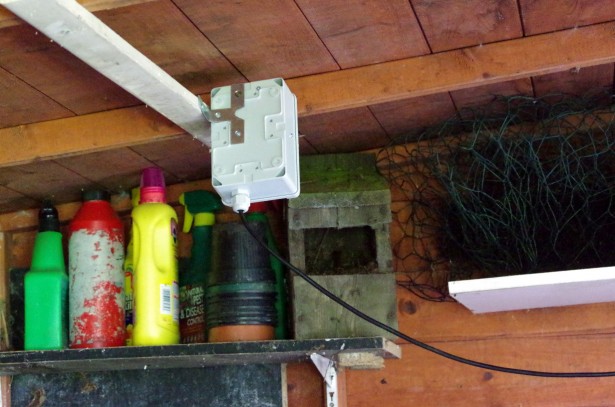 I had been checking on progress every few days via my PiCam, which I had hastily fixed inside the shed roof. I hadn’t seen very much, because the quick in/out route of the female was a bit fast for the Pi running “motion” at a very low frame rate. But I could tell from the short video clips and the timestamps that the female was sitting on eggs.

On Friday I set PiCam to stream video at 30fps, and I could see the female bringing in food. But the natural light was not showing any detail within the nest box. So I hacked PiCam by swapping the daylight camera for a filter-less one and taped a 36 iR led array to the from of the box.

This didn’t really help. I wanted to see the robins during the day, but the natural light level was high enough to keep the leds off  …except at night, when they drew an extra 0.25A from the 12V battery!

I then discovered that by simply opening the shed door, the light level in the box improved. (the box faces the door, and is 90degrees to the windows). This doesn’t seem to bother the robins, as they will use the open door in preference to their hole in the roof entrance. And of course we shut and lock the door most of the time.

So down came PiCam once again, off came the iR LEDs and iR camera, and the day-light RaspiCam went back in. I cut a short length of timber as a PiCam mounting bar and drilled a few holes along the edge about 5″ apart.

So as not to frighten the robins, whenever I enter the shed I move around slowly, humming a reassuring “no-tune” tune and avoid looking at the nest box in case the female is on the nest. This approach had worked on all previous occasions, as I had never scared the female, forcing her to fly from the nest.

But this time, I must have moved the wooden camera mount too close to the nest, because the female threw herself onto the floor by my feet, then made a ‘big-thing’ about flapping and limping across the floor and out through the door onto the lawn.

I guess she thought her chicks/eggs were in danger and hoped to draw me away by looking like an easy catch. I ignored this drama-queen and quickly fitted the camera bar to the inside of the roof. I then selected one of the pre-drilled camera mounting holes, fitted the camera, attached the battery leads, then got out as quick as I could.

With the camera now much closer to the nest and improved light levels, I got a much better view on my remote laptop.

Isn’t VLC great? By using the Video Options, you can play around with brightness, contrast and sharpness of the displayed video. This gave me an idea of what was needed, before going back to my PiCam and adjusting the RaspiCam command line to tune the sharpness (-sh 65) and brightness (-br 25).

I use the little red button on the remote VLC player to record video and then use AviDemux to edit it.

The standard RaspiCam lens is just a small piece of plastic. It often seems to suffer from lens flare, resulting in a low contrast image, lacking in fine detail. So I’d like to do my usual hack by removing the lens and fitting an M12 mount.