Time to take your electric meds. Sensors could come embedded in the pills in your next prescription, watching whether you take your medication on time and tracking your body’s response to the drugs.

The tiny sensors, which are ingested and pass harmlessly through the body, are part of the Helius system, developed by Proteus Digital Health in Redwood City, California. Together with a sensor-laden patch worn on the skin, Helius can let patients track personal data like activity levels and body temperature, and share it with their doctors or loved ones. 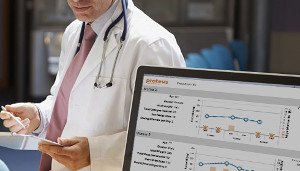 The system could also help solve a serious problem: half of all medications dispensed in the US are not taken as prescribed, because of factors such as forgetfulness or discomfort with a drug’s side effects. This costs healthcare providers between $100 billion and $300 billion in avoidable hospital visits and other expenses, and contributes to as many as 125,000 unnecessary deaths every year.

Several attempts have been made to solve the issue, including cellphone reminders and smart pill caps that record when you pop the bottle open. In the US, the federal Medicare programme recently amended its rules to reward healthcare providers if patients renewed prescriptions on time, and penalise providers if this didn’t happen.

But doctors still can’t tell for sure whether someone has taken their medication. A device like Helius could change that, and make patients more accountable for their own care.

“It’s going to take a little time, but we’re at the beginning of a real revolution,” says John Kane, a psychiatrist at the Albert Einstein College of Medicine in New York City, who worked with Proteus on early trials of the system.

Proteus declined to comment when contacted by New Scientist, but publicly available information likens their sensor to a potato battery. The millimetre-sized silicon sensor is tacked onto a pill and ingested. It is loaded with magnesium and copper, and when the metals come in contact with stomach acid, they create a small electric charge that triggers transmission of an electrical signal.

Pi on / off PSU relay switch

As everyone is aware the Pi has no on / off power supply switch the only way to turn it...