I was looking for a cool way to use the features of the Adafruit GPS module for a practical purpose, and Tony DiCola’s Arduino GPS Clock inspired me to create a GPS controlled atomic clock, with the addition of a weather station. 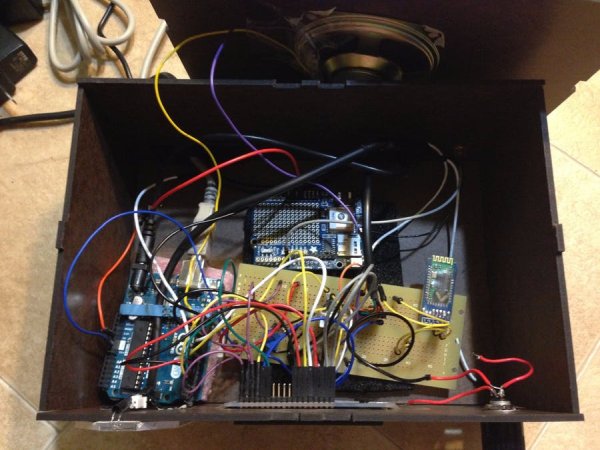 Connect the RGB 16×2 Character LCD Display to the Uno according to the diagram below, and you can display information from the GPS, such as time, date, longitude, latitude, and altitude.

The temp/humidity sensor is soldered onto the PCB: it simply requires a couple of jumper wires for 5V and Ground, and one wire to connect to Arduino’s Digital I/O pin.

I wanted to add a wireless component to the station, so instead of physical buttons to switch modes I could use my smartphone to display different information. I first tried this using a Bluetooth module but had no success in getting Arduino to receive the commands I sent. Then I decided to connect a Raspberry Pi 2 to the Arduino and use serial communication to send a simple command from my phone to the Uno. I set up the Raspberry Pi with WiFi capability though the WiPi USB dongle. Although Bluetooth was unsuccessful, I was glad to have the Raspberry Pi. The Pi is easily controlled with a smartphone app, its WiFi capability allows me to access the Internet, and the addition of Python programs allows me to expand this project.

On the IPhone I downloaded the SSH Control App, which allows you to connect wirelessly to the Raspberry Pi and send terminal commands through buttons and switches. With just a swipe of a slider switch you can start a Python program, then tap a button to send a character through the Pi to the Arduino, which will receive the command and change the mode on the LCD display.

Jakub Felcenloben [email protected] 2450 Introduction This is a small bench power supply that is powered by two lithium-ion batteries. The...