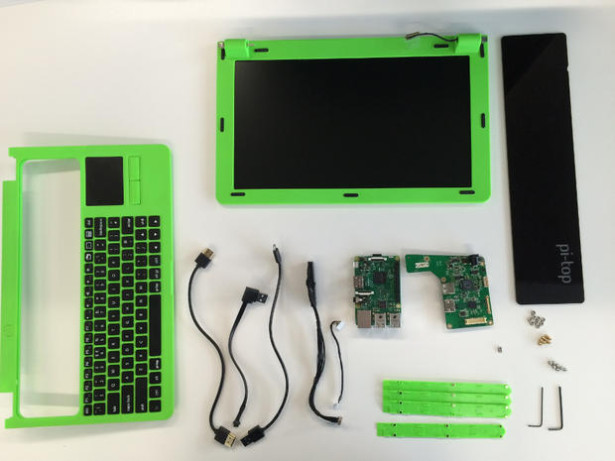 The Raspberry Pi 3 may fit in your pocket but in its simplest form it’s not a computer you can use on the move.

However, the Pi is nothing if not flexible and the Pi-Top kit gives you everything you need to turn the $35 computer into a laptop.

At $299 – including the Pi 3 – the build-your-own-laptop kit obviously adds to the cost of board. However, beyond just turning the Pi a mobile computer, the Pi-Top is designed to ease the novice user into tinkering with software and hardware. This user-friendly ethos is evident throughout the Pi-Top, in both its customised OS and its simple to slot together components.

The first step is building the laptop, which sounds far more daunting than it really is. The manual walks you through the process step by step and clearly identifies which of the limited number of parts you need to use at each stage.

The pictorial guide to assembling the laptop makes the job relatively simple – and the tools you need are included – but piecing together the case, boards and cables into a working laptop is a slightly nerve-wracking experience, at least initially.

Pressing the Pi onto the screws in the base of the laptop that hold it in place I worry about cracking some vital component, pushing the cables that link the Pi to thehub board I’m anxious about bending the pins. 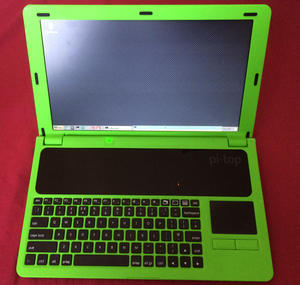 Most of this trepidation stems from my lack of familiarity with piecing together hardware, rather than the complexity of the assembly, which it turns out is pretty straightforward. The most fiddly aspect, for me, is tightening the miniscule 2.5mm nuts that hold the boards in place while working around the various electronic components sticking out of the board.

All told it took me about three hours to build. Your experience mayvary, on the one hand I kept stopping to take photos but on the other I had already familiarised myself with the process by first dissembling the fully-built computer I took delivery of (a process which took me longer than building it).

My fears of failure aren’t realised, the Pi-Top fits together and, to my surprise, boots up when I hit the power button.

Once completed the laptop is certainly striking. With a fluorescent green finish, the injection-moulded plastic case draws the eye and is sturdy enough to withstand knocks on the move.

The Pi-Top reskins the Pi’s Linux-based Raspbian desktop as the pi-topOS – adding a launcher and configuring the desktop so the menu button is in the bottom left – a setup that will be familiar to any longtime Windows users looking for the Start menu. The Pi-Top desktop is minimal but attractive, with a striped grey desktop background, clear and chunky icons and bold text with rounded edges.

Web browsing is as good as it can be on the Pi 3, thanks to the Chromium browser, which is installed by default. Chromium loads pages more rapidly and with less lag and graphical hitches than Raspbian’s default Epiphany browser or IceWeasel, a rebranded version of Firefox. If you’re planning to work on Gmail, Google Docs, Google Drive or other Google Apps, then Chromium is a must. In my experience Docs ran slowly on other browsers and Drive didn’t work at all. A full office suite is also included by default, the open-source LibreOffice, which – at least for the simple word processing tasks I used it for – feels as responsive on the Pi as on a $1,000 laptop.
More about Innovation

How the ‘PayPal Mafia’ redefined success in Silicon Valley

A decade ago, the PayPal Mafia played a major role in revitalizing the tech industry in Silicon Valley. The story behind this group of leaders proves that their success is more than just luck.

These simple changes may not sound like much to someone used to chopping and changing between different software and operating systems but to the novice users that Pi-Top is designed to attract, having familiarity in the OS and a web browser that’s less likely to disappoint is a good way of easing them into using the Pi.

Using the Pi 3 desktop felt fast and responsive, provided you don’t overload the board’s 1GB of memory by trying to open and close too many programs at once. Alt-tabbing between programs – Gmail in Chromium, LibreOffice and Mathematica – seemed fine however, with no noticeable lag. Similarly, the file manager and system menus felt nippy, with no perceptible slowdown. Running into the limits of the 1GB of memory seems hard to avoid, however, with Chromium running out of memory to display a page when using Gmail and Docs and two other JavaScript-heavy sites.

In synthetic benchmarks the Pi-Top performed slightly worse than my standalone Pi 3 – with the Pi-Top taking 55.08 seconds to complete a four-thread Sysbench benchmark compared to 45.92 seconds – but as mentioned the Pi-Top feels just as responsive as a standalone Pi to use.

A big plus for the Pi-Top is its battery life. I got just under 12 hours of life out of the system using it to browse the web, write articles and test out a few programs.

All that being said I don’t think I would want to use the Pi-Top as a general-use laptop, primarily due to its keyboard. While the Pi-Top is a 13.3″ laptop, the keyboard is squashed into a slightly smaller space to make room for a trackpad on its right.

When typing I found myself hitting the wrong keys due to the cramped layout, as well as certain keystrokes not registering. These difficulties diminished as I became more familiar with the smaller and slightly flimsy keys – and you can remap the keyboard layout – but if I’m honest I never felt completely comfortable typing on it.

The Pi 3 also has its own drawbacks compared to modern laptops and desktops. The Pi 3 suffers from slowdowns when doing heavy multi-tasking and is more sluggish than modern PCs when browsing the web. These drawbacks are understandable in a $35 machine and the fact it can be used as general PC is remarkable. However, when a computer is already at a relative disadvantage you don’t want any other aspects of the machine to make it more difficult to use – particularly when those issues affect something as fundamental as typing. You can still use a USB keyboard but then you lose the portability of the laptop. If all you want is a cheap and portable general-purpose PC then you can get a higher-specced Chromebook for the same money.

The Pi-Top differs from conventional laptops in other ways. It’s fairly tricky to access the Pi 3’s USB ports from outside of the laptop. The hole for the USB and Ethernet ports is fairly small and the ports sit some way inside the case, rather than jutting out through the side. This isn’t much of an issue as the top half of the base is covered by an acrylic screen that slides out to give you access to the boards underneath, allowing you to get at the ports. The Pi 3 also features 802.11n wi-fi, reducing the need for a wired network connection.

Why should you buy a Pi-Top?

However, to criticise the laptop for not measuring up to the best general-use PCs is also to miss the point of machine, which is to build on the Raspberry Pi Foundation’s mission to inspire kids and adults to tinker with and learn about computers.

The Pi-Top bundles the same collection of programming tools and aids found in Raspbian – as well as adding some of it’s own. Delve into the programming tools and there are IDEs for the Python and Java languages and a version of Minecraft that’s modifiable using Python, as well as Scratch – the drag and drop coding tool that lets kids animate cartoon characters and learn about programming concepts such as assignment and control flow. To teach users how to put these programming tools to good use the pi-topOS, like the Raspbian OS it’s based upon, includes links to the official Raspberry Pi Foundation magazine and teaching resources, which offer a host of tutorials on software programming and how to get started on building hardware.

This focus on moddability also explains the Pi-Top’s smaller than average keyboard. Almost half of the Pi-Top’s base is taken up by a black, semi-transparent piece of acrylic, which can be slid away to reveal the boards underneath – on one side the Pi and on the other a board handling power management, the display and other functions. Although I was using the Pi-Top with the Pi 3, it can be used with other single-board computers, such as Odroid. There is also space for dropping in your own circuit board for building prototype electronics – which can be controlled from the Pi-Top. These putative appliances could be anything from a simple flashing LED to a radio.

But the cherry on the Pi-Top when it comes to education should be CEED Universe, a pixel-art, 2D game designed to teach kids the basics of programming and even hardware hacking. The preview version I played was relatively straightforward, tasking players with exploring an unknown planet and gathering resources to help them continue their exploration. The small section I experienced gated progress using simple programming puzzles, where you drag and drop instructions to get a drone to follow the desired path, followed by a base-building task that asked you to redirect power to open doors. I was the only human-controlled character but the plan is that it will be a multiplayer title that rewards users for helping each other out. Puzzles are intended to become more complex and the sci-fi story more involved as the game’s development progresses, with certain challenges even requiring players to build hardware add-ons, such as a button-controlled light, to progress in the game. That said, I didn’t witness many of these features myself and the version I tried was still a work in progress. Either way it sounds like Pi-Top’s plans for gamifying education are certainly ambitious and the topics it teaches will be tailored around the demands of the teaching curriculum for computer science in UK schools.

To me this is where the Pi-Top’s strength lies. It’s not so much a general-purpose PC as it’s a tinkerer’s toolkit, which takes the moddability of the Pi and makes it mobile.

LAPIS Semiconductor, a ROHM Group Company, has recently announced the development of a low power microcontroller that integrates an 8bit...