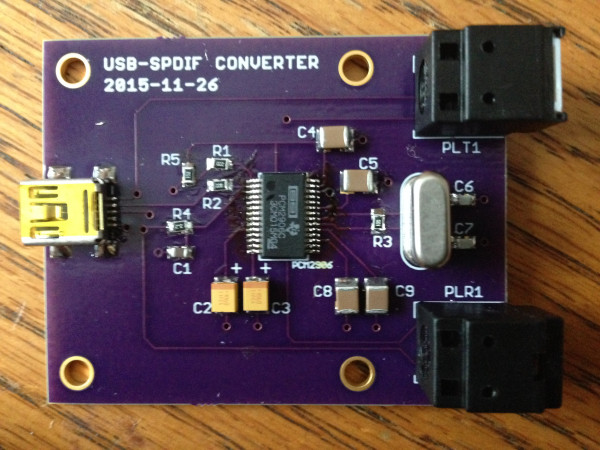 When S/PDIF became available in the Teensy Audio Library I thought this might be the solution to ground loop problems I’d been having when interfacing projects to my PC. However, I quickly realized I didn’t have any sound cards with an S/PDIF interface.

In the belief that I’d rather build than buy I decided to update one of my previous projects, a PCM2904 based sound card, to include an S/PDIF interface. The update was a cinch because TI has a pin-for-pin replacement for the PCM2904 (the PCM2906) with an S/PDIF interface. All I had to do was replace the audio jacks with fiber-optic transmitter/receivers connected to the appropriate pins.

The resulting schematic and prototype are shown below. (If you’re interested, the boards are available through OSH Park)

There’s not a lot to it. It’s simply the reference circuit from the PCM2906 data sheet with portions I don’t expect to use eliminated.

To test the interface I looped the transmitted fiber optic signal back to the receiver. When plugged into my Linux laptop it registered as a Texas Instruments PCM2906C Audio Codec as shown below.

Starting up the PulseAudio Volume Control and playing back a file using VLC, I could see the input and output audio levels varying with the signal from VLC.

If you want to actually hear the looped back audio you can use the PulseAudio loopback module.

For Technoport 2015 we were tasked to create an installation which would be displayed in the lobby at the event....