Olive oil at its finest quality is a product that brings alive the Mediterranean cuisine of which it is a staple. Unfortunately for many of us not fortunate enough to possess our own olive grove, commercial olive oils are frequently adulterated, diluted with cheaper oils such as canola. As consumers we have no way of knowing this, other than the taste being a bit less pronounced. Food standards agencies use spectrophotometers to check the purity of oils, and [Daniel James Evans] has created such a device using a Raspberry Pi. 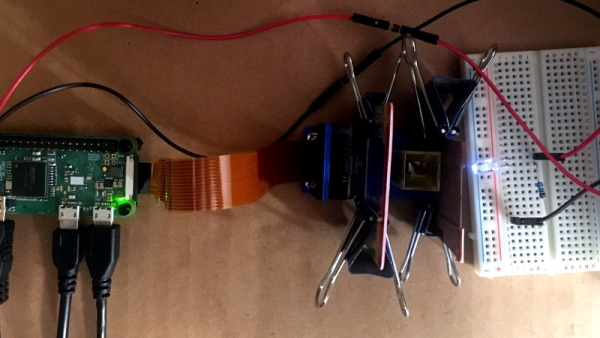 A spectrophotometer shines white light through a sample to be tested, splits the light up into a spectrum with a prism or diffraction grating, and measures the light level at each point in the spectrum to gain a spectral profile of the sample. Different samples can then be compared by overlaying their profiles and looking at any differences. This build shines the light from an LED through a sample of oil, splits the result with a diffraction grating, and captures the spectrum with a Raspberry Pi camera. Commercial instruments are usually calibrated by co-incidentally sampling a pure sample of the same solvent the test subject is dissolved in, in this case the calibration is done against a sample of pure olive oil. The software requires the user to identify the spectrum in the resulting photograph, before generating a curve.

From a basis of having worked with and maintained spectrophotometers in the distant past we would have expected to see an incandescent bulb rather than an LED for a flatter response, but since this is an oil identifier rather than a finely calibrated laboratory instrument this is probably less of an issue.

Over the years we’ve had quite a few spectrophotometer projects here, this Hackaday Prize entry from 2016 is just one of many.