Astronauts aren’t the only ones who get to use NASA technology. Computer scientists and engineers at NASA’s Goddard Spaceflight Center in Greenbelt, Maryland, work to make flight software and satellite technology more accessible in an effort to engage the public and educate students. 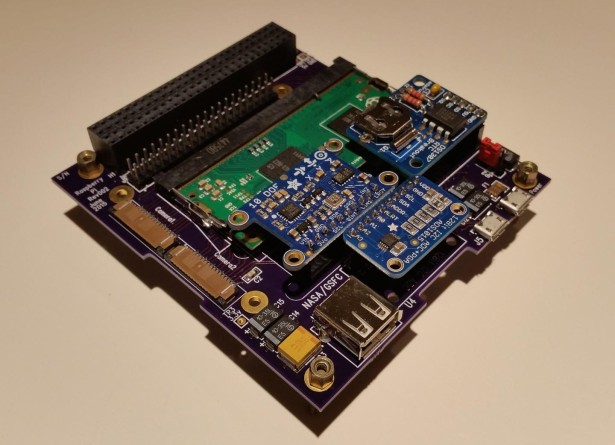 Students at Capitol Technology University in Laurel, Maryland, for example, use NASA technologies to develop their own computers and build their own small satellites known as Cube-Sats.

There has been an increasing interest in small satellite and CubeSat architecture. However, CubeSat software can often be too complex to implement into the classroom.

But thanks to a novel technology known as Pi-Sat, developing flight software for satellites and other systems is more accessible than ever before.

The Pi-Sat is a low-cost, easy-to-use test bed that facilitates the research and development of software for small satellite and CubeSat architectures.

“Even though the CubeSat is a compact spacecraft, it has all the complexities of a large spacecraft,” said David McComas, head of the Flight Software System branch at Goddard. “Now, with Pi-Sat, we have something everyone can use. You can literally just hook up a keyboard to it to send commands and receive data.”

The Pi-Sat is based on the Raspberry Pi, which gives the satellite its name. The Raspberry Pi is a low cost, credit card-sized computer that plugs into a computer monitor and uses a standard keyboard and mouse. It enables users to explore computing and learn how to code. Raspberry Pi is not best hardware available in terms of processing power, but it’s low cost and ease of development makes it ideal for classroom-built satellites.

Pi-Sat can also easily run the core Flight System, or cFS, software architecture that was developed at Goddard. The cFS became open source in December 2014. The cFS consists of a reusable software framework and a set of reusable software applications. It comes with a built system of sample apps and lab applications, as well as a tool that creates the skeleton of an app that allows users to customize their own applications.

“Making the cFS open source was a big plus because now we had this entire working product free for anyone to use,” said Susanne Strege, cFS project lead and associate head of the Flight Software Systems branch at Goddard. “It gives us a greater capability for educational outreach and is much more accessible to students.”

Alex “Sandy” Antunes, professor of astronautical engineering, and Patrick Stakem, professor of electrical engineering, have led the educational efforts around Pi-Sat and cFS at Capitol Tech by incorporating them into their curricula. They also host a summer workshop for college students from Brazil as part of a Science Without Borders program in which the students build and operate their own Pi-Sats and software. Nineteen students participated in the first workshop in 2015. This year, Antunes and Stakem will work with 30 students.

“Most university-class satellites still have issues, which are often software related,” Antunes said. “Having an open source control software such as cFS is essential to the success of student-built satellites.”

Students at this year’s workshop will advance the work of last year’s cadre, further developing the cFS and building their own satellites.

The Pi-Sat and cFS have made their way into the hands of students at other universities as well. Jose Martinez Pedraza, a student at the University of Puerto Rico at Mayagüez, has worked with the Pi-Sat and cFS during multiple internships at Goddard. Sharing his knowledge of these technologies with fellow students, Martinez and his team successfully ran cFS on a human rover they built for NASA’s 2016 Human exploration Rover Challenge held at NASA’s Marshall Space Flight Center in Huntsville, Alabama, April 6, 2016. The event challenged participants to design and construct rovers that could successfully perform in various environments in our solar system, including Mars, the moon, asteroids and comets.

Though they did not win the rover challenge, it was a victory for the educational efforts around the NASA technology.

“It’s awesome to see my fellow students working with this technology and getting excited about it when they get it to work,” Martinez said. “I think it’s great that Goddard is making all of this more accessible for everyone.”

These successes of students working with the Pi-Sat and cFS are just the beginning. McComas and Strege are working to develop an online open forum where Pi-Sat and cFS users can share their experiences and ask questions. They hope this online community will help advance the technology and engage even more people.

“I see this as a way of democratizing space; we’re trying to make it accessible to as many people as we can,” McComas said. “We want to give back and spread our knowledge to these students. You can talk theory all you want, but when you have something like this that is tangible, it captivates the students’ attention and they want to learn more.”

The cFS software architecture is available to the public under a NASA Open Source Agreement. To learn more about the cFS suite please visit: https://cfs.gsfc.nasa.gov/