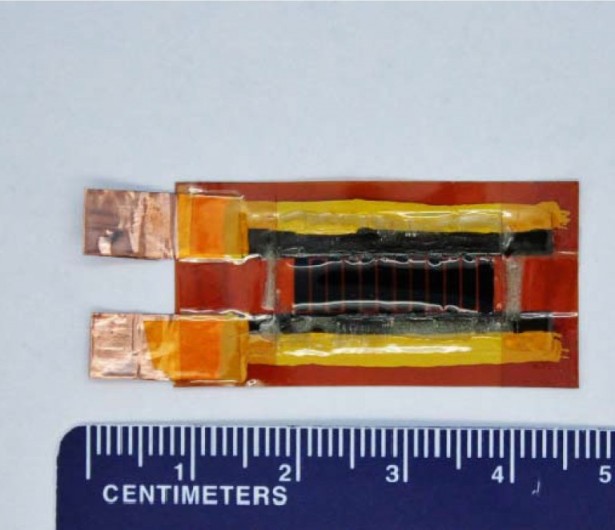 The devices developed in the lab of Rice chemist James Tour are geared toward electronics and apparel. They are the subject of a new paper in the journal Advanced Materials.

Microsupercapacitors are not batteries, but inch closer to them as the technology improves. Traditional capacitors store energy and release it quickly (as in a camera flash), unlike common lithium-ion batteries that take a long time to charge and release their energy as needed.

The devices are manufactured by burning electrode patterns with a commercial laser into plastic sheets in room-temperature air, eliminating the complex fabrication conditions that have limited the widespread application of microsupercapacitors. The researchers see a path toward cost-effective, roll-to-roll manufacturing.

“It’s a pain in the neck to build microsupercapacitors now,” Tour said. “They require a lot of lithographic steps. But these we can make in minutes: We burn the patterns, add electrolyte and cover them.”

Their capacitance of 934 millifarads per square centimeter and energy density of 3.2 milliwatts per cubic centimeter rival commercial lithium thin-film batteries, with a power density two orders of magnitude higher than batteries, the researchers claimed. The devices displayed long life and mechanical stability when repeatedly bent 10,000 times.

Their energy density is due to the nature of laser-induced graphene (LIG). Tour and his group discovered last year that heating a commercial polyimide plastic sheet with a laser burned everything but the carbon from the top layer, leaving a form of graphene. But rather than a flat sheet of hexagonal rings of atoms, the laser left a spongy array of graphene flakes attached to the polyimide, with high surface area.

The researchers treated their LIG patterns — interdigitated like folded hands — with manganese dioxide, ferric oxyhydroxide or polyaniline through electrodeposition and turned the resulting composites into positive and negative electrodes. The composites could then be formed into solid-state microsupercapacitors with no need for current collectors, binders or separators.

Tour is convinced the day is coming when supercapacitors replace batteries entirely, as energy storage systems will charge in minutes rather than hours. “We’re not quite there yet, but we’re getting closer all the time,” he said. “In the interim, they’re able to supplement batteries with high power. What we have now is as good as some commercial supercapacitors. And they’re just plastic.”

The Galvanic Skin Response (GSR) is a property of the skin to exhibit electrical characteristics. It is also known as...