Bluetooth is a very low cost and flexible way to add wireless communication to your projects. However, it can also be a bit tricky to set up. In this post we show you how to set up a Raspberry Pi with a USB Bluetooth dongle so that it can communicate with an Arduino using a Bluetooth serial module.

Once the set up is complete, we’ll have a new serial port on the Raspberry Pi that can be used to communicate with the serial Bluetooth module, either using a program such as Cutecom, or using one of the many serial programming libraries such as pySerial.

This tutorial is aimed at a Raspberry Pi running Raspbian, but it should work on other popular Linux distributions such as Ubuntu. To get a USB serial port set up on Windows, a good tutorial can be found here. 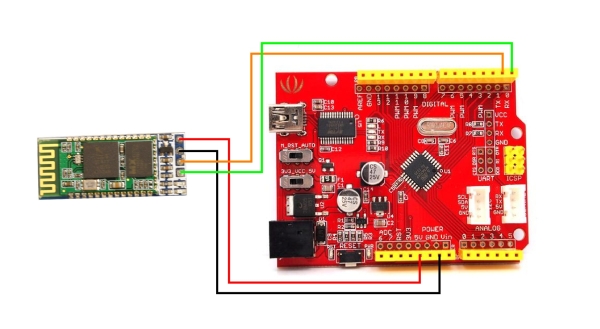 Preparing the Arduino/Seeeduino for Connection

Plug the USB Bluetooth dongle into the Raspberry Pi. Then open up a command line terminal and run the following commands

Get the name of your USB Bluetooth dongle by running

Now, ensuring that the Seeeduino is powered on, run the following command to find out the address of the serial Bluetooth module.

After a short delay, this should return the addresses of nearby Bluetooth devices. The Bluetooth serial module that we sell should be called something like ‘linvor’.

Before Bluetooth devices can communicate, they need to be paired. This can be done by running the following command

At this point, we have 2 Bluetooth devices that can communicate with each other, but we need to set up a protocol called RFCOMM so that they can communicate over a serial connection.

For more detail: Talking to a Bluetooth Serial Module with a Raspberry Pi