Amazon’s Dash Button, which I previously mentioned back in late May 2015, is the ultimate in consumer convenience (or, if you prefer, consumerism gone crazy). Simply press a button on the inconspicuous adhesive-backed device (perfect for attaching to your washer and dryer, refrigerator, counter, or cabinet), and your Amazon account is charged for the purchase while the corresponding product gets automatically ordered and shipped to you.

Initially unveiled on April 1, 2015 (therefore explaining why I at first thought the announcement was an April Fools’ joke from the company), they cost only $4.99, and Amazon more recently announced that it’d even refund the purchase price after your first associated-consumable order. How much hardware was Amazon able to squeeze into such a diminutive bill-of-materials budget, or perhaps more accurately, how much are Amazon and its consumable-supplier partners subsidizing the initial hardware cost in the hope of plenty of future generated profits? Let’s find out.

To begin, here are some views of the packaging for the particular unit I ordered, which is associated with Gatorade sports drink: 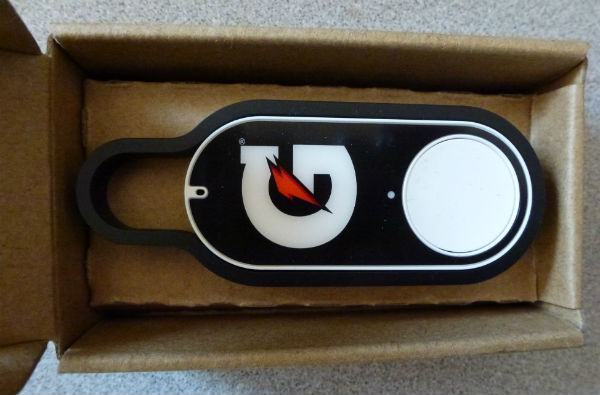 Perhaps obviously, the foundation hardware for all Dash Button variants is identical; customization occurs via the combination of assembly line-programmable firmware, a consumable brand-specific label applied to the device topside and a device-unique DSN sticker on the bottom. The brand label, along with the plastic outer oblong “ring” surrounding the remainder of the chassis, are easily removed:Somewhat surprisingly, the battery is welded to its associated positive and negative terminals, dooming the device it powers to a finite-duration lifetime, since the battery’s also not rechargeable (via Wi-Fi scavenging, a micro-USB tether or some other means). Now look closely above the positive terminal of the battery; what do you see?It’s an InvenSense INMP441 MEMS microphone, actually. Recall that the Dash Button requires connection to an owner’s Wi-Fi network, but there’s no wired Ethernet port alternatively available to send initial configuration data to it. One alternative means of accomplishing this objective, as is also done with products such as the Google Chromecast and Belkin’s WeMo switch, involves the device initially broadcasting a wireless network with SSID “Amazon ConfigureMe,” to which the Android version of the Amazon Shopping app connects. At that point, accessing the Dash Button’s built-in Web server at 192.168.0.1 enables entry of the remaining setup parameters.

The other configuration option is pretty (albeit not completely) unique, and leveraged by the iOS version of Amazon’s configuration app (the reasons for the operating systems’ setup discrepancy are unclear to me; perhaps Apple doesn’t give Amazon sufficient low-level access to accomplish an Android-like Wi-Fi hotspot scheme). In this case, setup parameters are sent via ultrasound from the smartphone or tablet to the Amazon Dash, using the former device’s speaker and the latter device’s aforementioned MEMS microphone.

Introduction Want to take your first steps into the magical world of the Internet of Things, or want to find...