The Raspberry Pi is an amazing low-cost computer. Unlike the ever-popular Arduino microcontroller, the Raspberry Pi was designed to be a full-blown computer from the start. It can run various flavors of Linux/Unix, act as a Media Center, and even moonlight as a Microcontroller.

This review covers 5 of the most popular Raspberry Pi starter kits currently on the market in 2015:

The Canakit arrives in a plain white cardboard box, but inside it has a lot of parts and components in glossy cardboard packaging. The kit comes with a Raspberry Pi 2 B model (the most advanced model) and a fancy black plastic case that is both sleek and solid.

The kit contains a 2.5A power supply, a 150mbps 802.11n USB WiFi adapter, and a high-quality 6-foot HDMI cable. It also contains a breadboard, a variety of LEDs, and other components. The only curious thing about all of this is that there was no manual! There’s a few URLs on the packaging to take the user to an online QuickStart guide. But no manual. How strange! 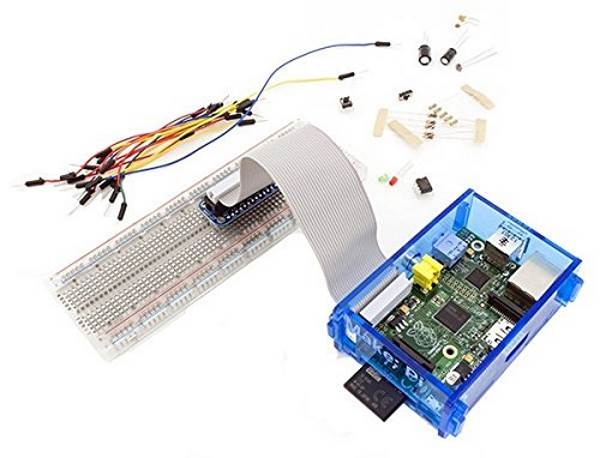 Like the Canakit, the Vilros also arrives in a plain white cardboard box. It also contains a Raspberry Pi 2 B model with a transparent plastic case. Although this case didn’t seem as sleek or special as the case that came with the Canakit, it *is* transparent and allows the user to easily see inside, which is pretty neat.

The kit contains a 2.0A power supply, a 150mbps 802.11n USB WiFi adapter, and an HDMI cable. It also contains a breadboard, GPIO breakout connector, a variety of LEDs and components. And a 208-page manual!

It is clear from one glance that the Maker Shed kit is the most physically polished kit of the bunch. The box appears to be printed in full 4-color and has the most flair of the four kits by a wide margin.

It includes a Raspberry Pi model “B” board, a Make “Breakout board”, and a stylish black/red enclosure. Though, surprisingly, it only included a 1A power supply. The kit also contains 60+ components, a deluxe breadboard, HDMI cable, and a 185-page book called “Make: Getting Started with Raspberry Pi. 2nd Ed.”

The Sunfounder kit is a bit different than the other kits in that it does NOT contain a Raspberry Pi. This starter kit  more or less presumes that you already have a Raspberry Pi or that you are going to purchase one to go along with it. This is actually a reasonable approach since it allows the user to choose either the (cheaper) Raspberry Pi “A” or “B” models or the (more expensive and more fully featured) “B+” model.

Unlike the other kits which seem to have a small selection of parts, this kit is packed to the gills with all sorts of components. This kit also includes a manual which is 49 pages long. No HDMI cable either.

UPDATE (22-January-2015): By popular demand, many people have pointed out that the Adafruit kit was not included. Originally, I had pre-screened (excluded) it from the review as it seemed too expensive ($100) for something that didn’t include a manual. Various people encouraged me to include it anyway since they had said that the Adafruit website tutorials were so excellent.

Unlike the Canakit and Vilros, the Adafruit kit does not include a Raspberry Pi, but has a breadboard and a breakout GPIO board called the “Pi Cobbler Plus”. The Adafruit kit includes a 4GB card (instead of an 8GB card) and pre-installs only Rasbian Linux distro. The kit also throws in a 2A power supply and a clear case, like the Vilros. The most popular add-on to this kit is the Raspberry Pi 2.

The curious addition in this kit was the USB to TTL serial cable designed for the Raspberry Pi. None of the other kits contained this cable. This is a great cable for debugging a Raspberry Pi and even logging into the console directly.

Comparing the 4 kits is a bit difficult. Between each kit, there was a fair amount of variation such that a “Raspberry Pi starter kit” means different things to different manufacturers. Every kit in this review comes with a breadboard, a General Purpose I/O (GPIO) cable, and a handful of LEDs. And that’s where the similarities end.

There were 3 interesting differences in the four kits: 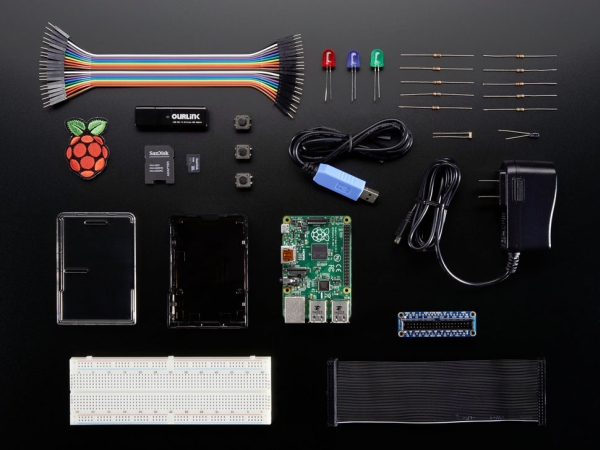 The Vilros Raspberry Pi User’s Guide is a nicely sized full-color manual with a glossy cover. Although not quite as polished as a book you might get at a bookstore, it is of good quality. It’s clear that a fair amount of thought went into creating a full guide that covers all the bases with the Raspberry Pi.

Right off the bat, the Vilros guide talks about what you can do with the Raspberry Pi as well as a chart showing what it is equipped with.

It walks the user through setup of the Raspberry Pi so that they can quickly get down to business. After setting up the Raspberry Pi, the Vilros guide jumps into 5 or 6 more topics.

The first topic is about building a Media Center out of the Raspberry Pi. The guide walks the reader through installing XBMC (recently renamed “Kodi”) — It lists all the formats that it can play and demonstrates how you can use your Raspberry Pi to play videos from memory cards or over the network.

The 2nd topic spans 3 chapters and talks about Programming. Specifically, it starts off with the visual programming language known as “Scratch” and even helps the reader create a simple version of the side scrolling fighter game “Double Dragon”. After this, it dives into a real programming language: Python.

Unfortunately, this is the part of the book where the content starts to get a little thin. Python *is* a complicated language, so it is somewhat understandable that the guide keeps things short-and-sweet as it is really a build up to the section on controlling and using the General Purpose Input/Output (GPIO) port.

This leads to the building of an Internet Camera (webcam) and then a “smarter doorbell”. The guide wraps up with using the Raspberry Pi to make Internet Phone calls using Google Voice.

The Make user guide included in the kit is an actual book that is already quite popular and gets good reviews. The book is a paperback and is of good quality. It is *not* printed in full color. The guide opens with a preface about why the Raspberry Pi was created and then lays out what you can do with a Raspberry Pi.

Like the Vilros guide, it walks the user through setup of the Raspberry Pi so that they can start playing quickly. It then jumps into 7 or 8 more topics.

The first topic is about navigating Linux on a Raspberry Pi. This consists of a crash course on the Linux command line, filesystem, and network as well as how to “sudo” and install additional software using “apt-get”.

After introducing the reader to Linux, the book dives into Python and spends 45 pages (~25% of the book) on just learning the language and how to make games using the Pygame library. It takes the time to talk about the Python language for users coming from an Arduino background and the “sketches” that Arduino uses. It talks about importing libraries and other modules as well as where to learn more about Python.

The book then jumps into writing a mini “Space Invaders” clone using the Scratch programming language. It doesn’t spend as much time on Scratch as the Vilros book did. This is probably because the Make book seems to be more focused on using the Raspberry Pi as a Linux computer.

Unfortunately, this is where the lack of color printing becomes a problem. There are parts of the book where the black and white diagrams of the breadboard become hard to follow. There are also no schematics of the circuits either. This is the part of the book that could be better. The Vilros guide is a bit clearer in that it uses both simplified schematics and color wiring diagrams.

The book rounds out the last couple chapters talking about using a webcam with the Raspberry Pi as well as using the Pi as a webserver.

About 17 lessons that are all just a few pages each. There is no introduction or any hand-holding in getting your Raspberry Pi setup. After the table of contents, it just jumps right into the first lesson.

Yes, the Sunfounder Raspberry Pi guide is that small compared to the other manuals.

Each lesson talks about an experimental principle which usually has an electronic schematic to go with it.

Along side that is the full-color electrical wiring diagram and photo of the finished project.

The guide just instructs you to copy the source code (written in the C language) to the Raspberry Pi and compile it using the GCC compiler.

It’s abundantly clear that this is NOT a guide for beginners, but rather it is a guide for engineers and people who like to tinker.

The Adafruit user guide included in the kit is online. Yup, there’s no book. The guide has a list of 13 Lessons which are listed out for you.

The first few Lessons are about configuring the SD card, Installing the Raspberry Pi flavor of Linux known as Raspbian (based on Debian Linux), and setting up your network.

Upon reading the guide on the Networking chapter, there it was at the bottom: The lesson was originally published on Dec 2012, but has been continually updated over the past 2 years. And it became clear that (in some ways), an online guide was perhaps better than having a physical book. There’s nothing worse when learning about a complex subject than the instructional material being out-of-date with errata. So this was a big plus!

As progress was made though the remaining lessons, some of the lessons (about DC and Servo motors) couldn’t be conducted because the Adafruit kit doesn’t contain either of these motors. That was a bummer.

On the plus side, the whole Adafruit Learn Raspberry Pi site is chock-full of amazing projects. Yet the lack of a good starter guide was nagging.

Want to mine some bitcoins? Want to earn for free? Have a pi not being used? Then lets mine some...