The intention of the article is to highlight opportunities presented by incorporating simple modern digital methods in the design of SPRAT-style radios – not to promote one particular design.

The ideas in the article have been demonstrated in the construction of a simple rig, a picture of which appears on the front cover of SPRAT 156 and is repeated here…

The example schematics presented in the article, and the “General Arrangement” in the main double-page graphic, all relate to this little rig.
The rig has few merits other than the facts that 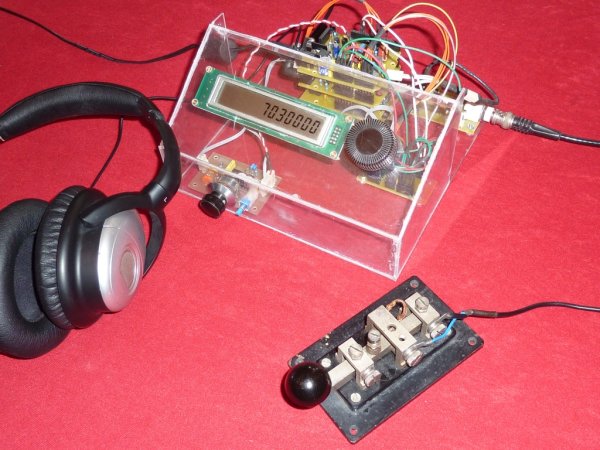 Further detailed descriptions of the important sub-systems within the rig appear below.

Remember: you are welcome to copy any of the ideas on this page but that’s not my intention. My intention is to encourage you to use the general principles in your own rigs.

The arguments in the “Occam’s Microcontroller” article are agnostic to the particular microcontroller being used. However, the article does describe the recent revolution in access to microcontroller technologies embodied in the “Arduino Electronics Prototyping Platform”. All the resources presented on this page (and used in the original rig) are expressed in the context of the Arduino.

Those with appropriate experience can use any number of alternative microcontrollers (such as PICs) or physical computing platforms (such as the Raspberry Pi) to good effect. But I recommend that beginners seeking to follow the “Occam’s Microcontroller” ideas start with the Arduino.

You can learn about Arduino and download the Arduino software from here.

There are useful tips and tutorials, explaining how to get started here.

Don’t be discouraged if you are new to digital systems – “The Arduino programming environment is easy-to-use for beginners, yet flexible enough for advanced users to take advantage of as well“.

Arduino programs are called “sketches”. There are many simple sketches for beginners on the Arduino website – but Radio Amateurs also should see my Iambic Keyer example, which will give opportunity to learn in a more relevant environment.

You can download the sketch which drives the original Occam’s Microcontroller rig from here.

You can also find a sketch to run a quick test on the DDS module (setting it to 1 MHz output) here.

There’s a new version of the Occam’s Microcontroller rig, using a 16*4 alphanumeric display – description appears lower down this page.

There’s an even newer, enhanced version of the rig, called “Occam’s Dagger”, which is described here.

The “Occam’s Microcontroller” rig is built around a stack of four PCBs, as seen in the photo below. The bottom of the stack is an Arduino and the upper three boards are Arduino “Shields”…

In truth, the bottom of the stack is not an Arduino proper – rather it is a “Wotduino” – my homebrew Arduino clone, which is described here.  Eagle design files for a single-sided PCB version of the Wotduino can be downloaded from here should anyone wish to use it (Arduinos are so cheap it might not be worth the trouble!)
The other PCBs in the stack all share the same “Shield” format – Shields “are boards that can be plugged on top of the Arduino PCB extending its capabilities“, as you can learn on the Arduino website. The DDS, Receiver and Transmitter shields are described below.
In fact, these three shields have an additional common feature; a common “bus” structure carrying RF signals. I’ve built an Eagle library including this component, ‘m0xpd-Arduino.lbr’, which can be downloaded from here. 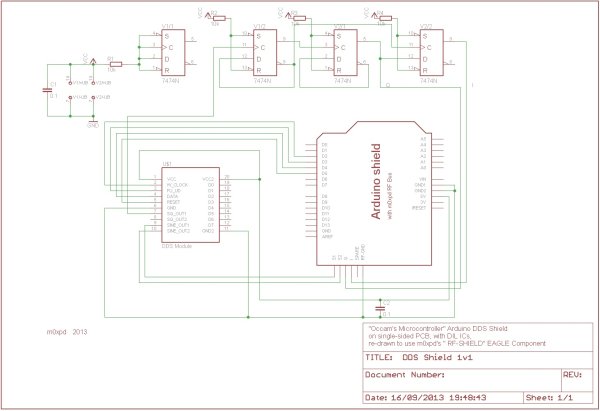 The “Occam’s Microcontroller” rig is built upon a direct digital synthesis module which carries the AD9850 device. This module can be interfaced directly to an Arduino – but, for convenience, I have mounted the module on a new Arduino shield, as originally described here.
The schematic for the DDS shield is shown below.
Eagle design files for a single-sided PCB version of the DDS Shield can be downloaded from here.
The Arduino DDS shield is now available as a kit from Kanga.
The combination of an Arduino and the DDS shield can be used as an RF signal generator or a flexible VFO, as described here.

The “Occam’s Microcontroller” rig used a transmitter built on an Arduino shield, as shown in the photo below and originally introduced here.

My preferred method to work with a Raspberry Pi is via SSH. When one installs Raspian from the Raspberry Pi...