The Sinclair ZX Spectrum was a compact and affordable personal computer when it first launched in 1982 for £125 (the equivalent of £470 or $745 in 2022). Designed to use tape cassettes for storage, it was also relatively easy to obtain media. 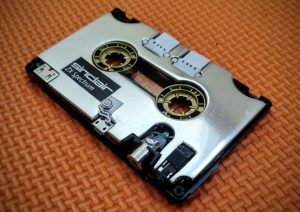 But computers have gotten a lot smaller and cheaper over the past four decades, and one hardware hacker has proven that by stuffing a fully functional PC inside a hollowed-out tape cassette. In other words, you can run ZX Spectrum games and software on a device that looks like storage for the original computer.

The latest issue of the MagPi magazine includes an interview with Stuart Brand, who explains that he used a hand file and side cutters to open up a cassette tape and then used a dremel to file down a Raspberry Pi Zero W so that it could fit inside (he lost some GPIO pins, but the little computer is otherwise still functional).

He then wired up some extra USB ports and A/V ports for connecting to an old-school CRT display and built a custom heat sink from a piece of sheet metal which offers enough cooling to safely overclock the Raspberry Pi Zero W.

Brand says the system boots into a ZX Spectrum Emulator in just 16 seconds.

Source: This tape cassette is actually a full-fledged computer (powered by a Raspberry Pi Zero W)