Raspberry Pi’s are inexpensive credit card sized computers conceived by Eben Upton and designed by the Raspberry Pi Foundation Team in the UK. They are now built in the UK as well.

TiddlyWiki 5 is the latest version of TiddlyWiki which was created by Jeremy Ruston from the UK over 10 years ago.

In this tutorial I will show you how to create a basic server on the Raspberry Pi using BerryBoot Server and BidiX store.php script to allow you to store your TiddlyWiki 5 HTML files on your Raspberry Pi.

By putting TiddlyWiki 5 on your Raspberry Pi BerryBoot Server you can create multiple users and TiddlyWiki’s to be used in a small group, hackerspace, home project, or classroom.

What You Will Need

2. Keyboard, Mouse, and Screen – This is only necessary to set the password on the BerryBoot Server. Once this is set up you will no longer need these and the Raspberry Pi will boot headless.(without monitor)

3. FTP Software – I use Filezilla on the PC – This allows you to connect to the Raspberry Pi and upload the software. 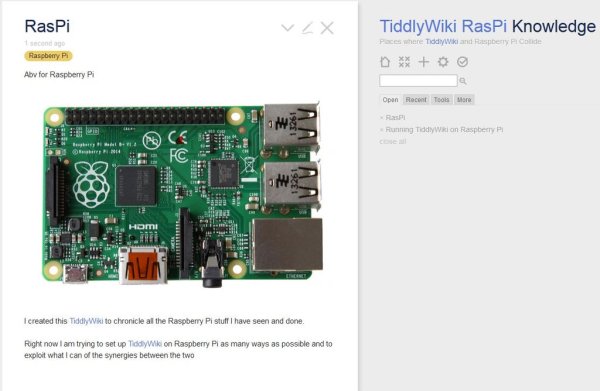 4. BidiX store.php software – This is the script that allows you to save your TiddlyWiki 5 onto the server.

5. Text Editor – I use Notepad ++ but any text editor will work. The text editor is used to update the user names and passwords in the BidiX store.php script.

6. TiddlyWiki 5 – You can also use TiddlyWiki Classic Files with this solution as well – TiddlyWiki is an amazing and awesome piece of software technology. A Single file Wiki based on HTML 5 standards that can do anything you can think of, and many have. Check out my TED Talks TiddlyWiki to see what I have created with TiddlyWiki as well as my TiddlyWiki of TiddlyWiki’s Page for other projects I am using TiddlyWiki for. Blank an SD Card.(I use a PC with SD Formatter – They also have a version for the Mac)

You need to make sure that your SD Card is blank before you start.

I recommend a 2GB card to allow you to put lots of information in your TiddlyWiki. Although you can use a 1GB or smaller SD card.

How much storage do you need?

Side Note – You can also use a 128mb(yes 128mb) MicroSD card in the B+ or SD card in the B with or without a USB Flash Drive(side note to the side note – this is not covered in this tutorial, please see my other tutorial for instructions on how to do it. Downloaded and put BerryBoot on the SD Card.

BerryBoot is very small in size(28.2mb at time of writing this) and should take less than a minute to download.

Once you have downloaded it drag and drop the contents onto the freshly blanked SD Card.(This should be the same or similar on other operating systems, the images are from a PC.) Put the MicroSD or SD Card into RasPi and powered on(plug it in).

Make sure you connect the Keyboard, Mouse, and Monitor before plugging in the Raspberry Pi. The Raspberry Pi will boot up to the Berry Boot Menu.

Select the ‘More Options’ tab and under that choose ‘BerryBoot Server’. BerryBoot Server loads and configures itself.

Sit back and wait as this is the longest part of the install.

You can work on the other steps on your other computer as this loads if you can switch your monitor over or have a second monitor. While the BerryBoot Server is setting itself up you can download BidiX store.php if you haven’t already and using a Text Editor(I use Notepad ++) update the user names and passwords.

Use a text editor to change the user names and passwords on store.php

Also grab an FTP application at this time if you don’t already have one. I use Filezilla on the PC.

If you don’t have TiddlyWiki 5 this is also a good time to grab that while you are waiting. Make sure to write down what you change it too. You will need to make sure your RasPi has a keyboard, mouse and monitor to change the password. Once you do this you will can run your RasPi headless as it auto launches the server on reboot.

Also make sure to write down the IP Address of the BerryBoot Server so you can reach it from another PC. Connect to your Raspberry Pi with your FTP program using the IP address, user name, and password.

Now upload the store.php script into the folder you will be using with TiddlyWiki 5.

If you did not change the user names or passwords in store.php you could use your FTP program to edit the file while it is on the server. You can also do this to add additional users to the store.php script after the initial configuration.

Make sure you set the permissions of the store.php file to 744. If you do not do this then when you hit save on your TiddlyWiki you will receive an error. The 7 means that the script can execute commands and that allows it to ‘store’ your TW on your server. Step 10: Open TiddlyWiki 5 From Another Computer Open the TW5 file on the RasPi from another computer and update the Control Panel details.

See Image for the locations of the details.

Backup Directory – This is where all of your back up files will be store. It is recommended to put them into a folder to keep the main directory uncluttered(Note I did not do this in the image and later changed it)

Step 11: TEST by Saving Your TiddlyWiki 5 Now for the test to see if you have it right, create a new tiddler and if autosave is on it will save once you close it.

If you get an error, make sure your permissions are set correctly.

Please let me know if you have any other errors or issues.

Change the name of the ‘upload filename’ in the control panel and hit save.

You just created a NEW TiddlyWiki.

NOTE YOU WILL NEED TO LOAD THAT TIDDLYWIKI NOW TO USE IT.

If you add any data to the TiddlyWiki it will save to the New File and if you reload the page you are on the data will seem to ‘disappear’ as you were not actually saving in the original file. If you do this you can easily drag and drop the tiddlers to the correct spot and import them.

Sometimes you need to hard reset the browser using + refresh for changes to take place.

Get Started With Raspberry Pi

Hello everyone. Welcome to my First Instrucatble. You may be asking yourself "I want a Raspberrry Pi, but I don't...