TritiLEDs are always-on battery powered LED glow lights for general night-time marking use. Radioactive gaseous tritium light sources (GTLSs) are allowed in the United States in several consumer product categories, including watches, compasses, and gun sights, but general-purpose markers are considered “frivolous” and are prohibited. Levaraging advances in LED efficiency, battery capacity, and microcontroller technology, TritiLEDs run from 1 to 15 years depending on battery choice, and while larger than typical GTLSs, can replace expensive and sometimes illegal tritium lighting in a variety of applications (including the fivolous). Version 1.0 of the hardware and software is complete and released under an open-source (CC-BY-SA) license. Versions 1.1 and 2.x are works-in-progress and will be documented here as they are developed. 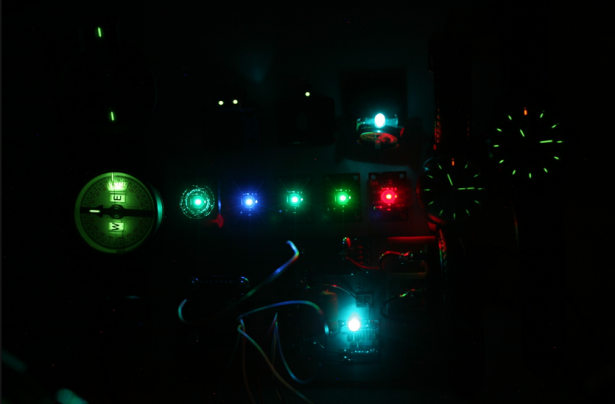 This is a project born of frustration. As an amateur astronomer and astrophotographer, I often find myself stumbling around expensive and fragile equipment in the dark. A few years ago, I went looking for glow-in-the-dark markers I could attach to tripod legs and other gear to avoid costly accidents. I quickly dismissed traditional glow-in-the-dark (phosphorescent) materials because of their short half-life and the need to “charge” them before use. Chemiluminescent markers (glow sticks) are better in this regard, but are too expensive to continually replace, and end up in landfills after one night’s use. Radioactive markers (especially tritium-based), with their constant glow and multi-year half-life, are technically almost perfect for this application: you can stick them to equipment and you’re done. The problem with tritium markers is that they’re not legal for manufacture or sale as general-purpose consumer devices in the United States (watches, compasses, and gun sights are exceptions). Even where they are legal, they are still quite expensive. This leaves electronic markers, but these often share similar shortcomings with other glow-in-the-dark technologies: constantly charging or replacing batteries, short-duration illumination, or high long-term cost. What I wanted was a small constantly-glowing LED that I could put somewhere and not have to service for a year or more. Unfortunately, most portable LED lamps are designed as flashlights – they emit a relatively powerful beam for a short duration (hours or days) per battery or charge. There’s a race in the industry to make brighter and brighter lights. I wanted to go the other way: relatively dim lights, useful in dark situations, that maximized runtime.