Mini PC enthusiasts who enjoy building projects using Raspberry Pi, Nvidia Jetson and Turing RK1 compute modules may be interested in a new piece of hardware launched via Kickstarter this week which has already raised over $1.1 million thanks to nearly 4,000 backers with still 28 days remaining. The compact modular cluster computer is the Turing Pi 2 and has been created by the team at Turing Machines and takes the form of a 4-node mini ITX cluster board with a built-in Ethernet switch that runs Raspberry Pi CM4 or Nvidia Jetson compute modules in any combination. 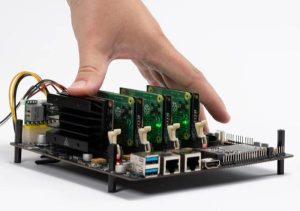 ” It’s like a data center server rack but compact, noiseless, and highly energy-efficient. It’s perfect for building your own Homelab, self-hosting, running the cloud-native stack (e.g. Kubernetes), and machine learning 24/7. The use cases are limited only by your needs and imagination. The Turing Pi 2 supports Raspberry Pi 4 and Turing RK1 compute modules for general compute and Nvidia Jetson compute modules for machine learning tasks.

If the Turing Pi 2 crowd funding campaign successfully raises its required pledge goal and the project progresses smoothly, worldwide shipping is expected to take place sometime around September 2022. To learn more about the Turing Pi 2 Pi cluster computer system project play the promotional video below. Specially priced early bird pledges are now available for the inventive project from roughly $219 or £176 (depending on current exchange rates).

“Nowadays, online services are deployed via cloud-native apps and microservice architectures. The Turing Pi 2 is a Kubernetes-ready platform that allows you to build robust cloud-native applications and develop a proof-of-concept prototype before you get bombarded by cloud bills. With the Turing Pi 2, you can seamlessly learn open-source tools such as Kubernetes, Prometheus, Docker, and Serverless with a cluster-level configuration, the same way as you would in a real data center environment.”

For a complete list of all available early bird pledges, stretch goals, extra media and full specifications for the Pi cluster computer system, jump over to the official Turing Pi 2 crowd funding campaign page by visiting the link below.

As the immense value proposition of Edge Computing becomes more obvious, Chip manufacturers are working twice as hard to be the one...