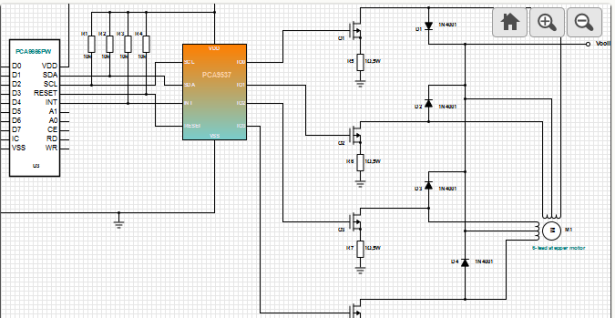 This unipolar stepper motor driver circuit is used to drive a 12V unipolar stepper motor with a current rating of 1.25A. It uses PCA9537 IC, which is a 10-pin CMOS device that provides 4 bits of General Purpose I/O (GPIO) expansion with interrupt and reset for I2C-bus/SMBus applications. It consists of a 4-bit configuration register (input or output selection), 4-bit input port register, 4-bit output port register and a 4-bit polarity inversion register (active HIGH or active LOW operation). In addition, the device uses PCA9665 IC that serves as an interface between most standard parallel-bus microcontrollers/microprocessors and the serial I2C-bus allowing the parallel bus system to communicate bidirectionally with the I2C-bus.

The PCA9537 totem pole GPIO used in this circuit has a fixed I2C-bus slave address, 92H. The host controller’s firmware generates the I2C byte sequences needed to toggle the outputs and provide the waveforms at the gate inputs G1 to G4. The type of waveform will be one corresponding to wave, two-phase or half-step drive that is chosen by the user. The duration of the pulses is controlled by time delay implemented in the host controller firmware. It is shown as a reference for the various waveforms. The maximum I2C-bus speed supported by PCA9537 is 400kHz.

Motor drivers have various applications that are used when accurate positioning is required. Such applications are for use in holding or positioning, like packaging machinery, and positioning of valve pilot stages for fluid control systems. The device enhances the performance of machines and other simple devices that may significantly support industries, and other commercial entities to make the work easier.